Hunter riders will showcase their talents throughout the week in the main International Arena at PBIEC through Sunday, February 19, while CSI 3* jumper competition continues in the Global Arena and Derby Field at Equestrian Village (the Adequan® Global Dressage Festival show grounds, 13500 South Shore Blvd) at PBIEC.
A week six highlight is the Friday night’s $130,000 Grand Prix CSI 3*. Saturday will feature the $10,000 Hollow Creek U25 Welcome, presented by EnTrust Capital, and the $35,000 Suncast® 1.50m Championship Classic on the derby field at Equestrian Village, as well as the $100,000 WCHR Peter Wetherill Palm Beach Hunter Spectacular in the International Arena on the main WEF show grounds in the evening. Sunday highlights are the $35,000 Hollow Creek Farm U25 Grand Prix, presented by EnTrust Capital, and the $50,000 National Grand Prix on the derby field. This week’s events can be viewed live HERE. The 12-week WEF circuit continues through April 2, 2017, awarding over $9 million in prize money.

Scott Stewart rode Catch Me to the championship title and Cameo to reserve honors in the Antares High Performance Hunter division for WCHR week. Stewart piloted Catch Me, owned by Gochman Sport Horses, LLC, to win the handy with an impressive score of 95, an over fences class, and the under saddle. The coming ten-year-old gelding by Casiro has a long list of accolades to his name, including a win in last year’s Hunter Spectacular. Stewart guided Dr. Betsee Parker’s Cameo to a first place finish in the stake class and second place under saddle.

“Catch Me is a horse of a lifetime,” Becky Gochman praised. “He has surpassed any pre-conceived notion of what we had thought he might become. Everything is icing on the cake at this point. We’ve figured him out, and I think he’s figured out that we want to do what is best for him. It’s been a complete joy.”

Lucador, another entry of Dr. Betsee Parker, and Stewart were named champions of the Shapley’s Grooming Products High Performance Conformation division. Although WCHR week is the nine-year-old Oldenburg gelding’s first outing of 2017, Lucador proved to be in top form. The pair won the handy round, and an over fences class, and placed second in the stake, model, and under saddle. Stewart also secured the reserve title aboard Fun, owned by Gochman Sport Horses, LLC, earning first place in the stake, model, and under saddle, and second and third place in the other two over fences classes.
“He was good today,” Stewart said of Lucador. “He has so much experience – this is our fourth year together – that I don’t worry about him. He’s like a big pony; you have to do it his way a little bit, but he’s great.”

Havens Schatt of Georgetown, KY, and Aristocrat, owned by Tracy Scheriff-Muser, were crowned champions of the Equine Tack & Nutritionals Green Hunters 3’9″ with three wins. The pair topped two over fences rounds, scoring a 90 in each, and the under saddle. Schatt started riding the 2008 gelding by Balou du Rouet five years ago, right after he was first started under saddle. Scott Stewart and Fashion Farm’s Captivate settled for the reserve title with a win the handy class, second place under saddle, and fourth and fifth place finishes over fences.
“He has so much ability,” Schatt detailed. “This year, he’s really coming into his own, consistency-wise. His father is Balou du Rouet, whose offspring have the reputation that they need to trust you before they perform for you. He’s a fun horse to have and a bit of a challenge in that he’s slightly different every time you get on him.” 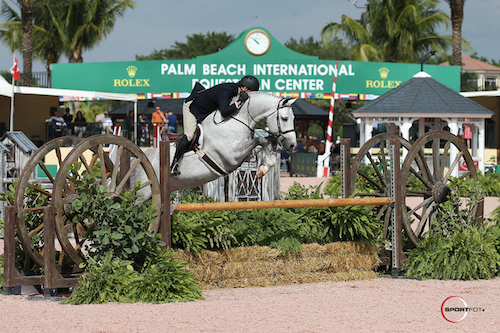 Luster and Scott Stewart
Scott Stewart claimed champion and reserve honors in the Equine Tack & Nutritionals Green Hunter 3’6″ division. Riding Rivers Edge’s Luster, Stewart won the under saddle, the handy round, and placed second in an over fences class to earn the championship ribbon. The reserve ribbon went to Wonderly, a 2009 Brandenburger gelding by Burberry owned by Dr. Betsee Parker. Stewart piloted Wonderly to a win in the stake class and third place finishes in the handy and under saddle.
“Luster is really fun to ride,” Stewart explained of the 2010 Westphalian gelding by Coranado LL. “He’s such a good jumper. This [WCHR week] is his fourth horse show of the year, and he’s been champion and reserve leading up to this.”

Private Life, owned by Dr. Betsee Parker, swept the Shapley’s Equine Grooming Products Green Conformation Hunter division, winning all five classes with Scott Stewart in the irons. Stewart had nothing but compliments for the KWPN gelding by Verdi.
“He’s awesome!” Stewart exclaimed. “He’s actually the youngest, just turning six this year, and rides like a made horse even though he’s green.”
Jannifer Hannan of Wakefield, RI, and Best Regards secured reserve honors in the Shapley’s Equine Grooming Products Green Conformation Hunter division. Hannan piloted Patricia Fulchino’s 2008 Holsteiner stallion to second place ribbons in the model, an over fences class, and under saddle, and a third place ribbon in the stake round.
The CWD Saddlery Performance Hunter 3’6″ division yielded a remarkable 101 competitors on Thursday afternoon. Due to the number of entries, two championships were awarded. Elizabeth Boyd of Camden, SC, and Stella Styslinger’s Cassanto captured the first championship ribbon. The pair earned the high score of the division with a 92 in the stake round. Victoria Colvin of Loxahatchee, FL, guided Koala, owned by John & Stephanie Ingram, LLC, to win the other championship ribbon.
Samuel Parot and Atlantis Win $35,000 Ruby et Violette WEF Challenge Round 6
Competing in the Global Arena at Equestrian Village at PBIEC, Chile’s Samuel Parot and Atlantis were victorious in Thursday’s $35,000 Ruby et Violette WEF Challenge Cup Round 6 at the 2017 WEF.
Richard Jeffery (GBR) set the course for 61 entries in the WEF Challenge Cup, qualifying 22 for the jump-off, with four opting not to return. Completing the short course without fault, Parot and Atlantis clocked the fastest round in 31.94 seconds for the win. 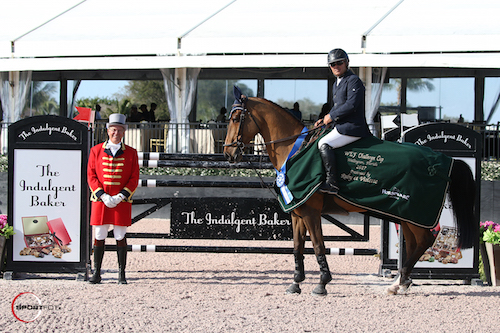 Samuel Parot and Atlantis in their winning presentation with

Brazil’s Pedro Muylaert finished second in 33.68 seconds riding Stenio de Silva’s Prince Royal Z MFS. Laura Chapot (USA) and Mary Chapot’s ISHD Dual Star placed third in 33.79 seconds, and Daniel Coyle (IRL) riding Ariel and Susan Grange’s Cita finished fourth in 33.92 seconds.
“When you walked the course, you thought it was more difficult, but there were a lot clear today,” Parot noted. “The horse felt very comfortable. In the jump-off, it was difficult. You had a turn to the combination that made a lot of problems.”
Parot purchased Atlantis, a top ranked 14-year-old Zangersheide gelding (Andiamo Z x Royal Bravour L), just before the 2015 Pan American Games in Toronto. Together the pair has been incredibly successful at the international grand prix level.
“He is a very good horse. He won a lot of grand prixs last year,” Parot stated. “He is very fast.
He is always pulling, so I ride him in a hackamore at home because he is very sensitive. I work him on the flat a lot and do not jump too much at home, but he knows when he is at the show. He is brave and has a very good head. He is fast and careful. He is a really top horse.”

Photo Credit: Photos © Sportfot, Official Photographer of the Winter Equestrian Festival. These photos may be used only in relation to this press release and must include photo credit.