ARCADIA , Calif. (March 16, 2013)—With consummate ease at even money, Joyful Victory, with female sensation Rosie Napravnik aboard, became Thoroughbred racing’s newest millionaire as she cruised to a dominant gate to wire victory in Saturday’s Grade I, $300,000 Santa Margarita Stakes, winning by four lengths while covering 1 1/8 miles in 1:49.53.

With front running Great Hot and Gary Stevens drawn to her immediate outside in post position three, Joyful Victory had a half length advantage going into the Club House turn and the 5-year-old Ontario Canadian-bred mare continued to lead by the same margin past the half mile pole and into the far turn.

“She broke sharp,” said Napravnik , America ’s leading rider by number of wins (79) coming into Saturday.  “She likes to run freely and doesn’t like being restrained so it was nice that we had plenty of room on the rail to take the lead into the first turn.  She was just relaxed and ran a great race.”

Joyful Victory, a strikingly beautiful grey or roan mare, who set fractions of 23.02, 46.50, 1:10.50 and 1:36.00, asserted her dominance approaching the quarter pole as she opened up a four length advantage on 2-1 second choice More Chocolate and maintained it to the wire. 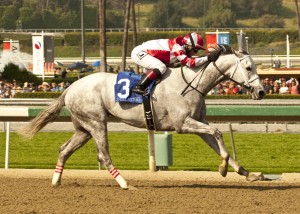 “I thought we were going to be on the heels of horses on the first turn, but when Gary’s horse went wide, Rosie just took advantage of it and thought this was the parting of the Red Sea…and it worked out very well,” said winning trainer “Cowboy” Larry Jones, who flew in Thursday nightfrom his base at Fair Grounds Race Course, in New Orleans.

“I was starting to wonder if she (Joyful Victory) was ever going to show up at the right time on the right day (to win a Grade I),” said Jones.  “She had shown us this brilliance at times, but she’s just doing everything better right now.”

Second in the Grade I Zenyatta Stakes at Santa Anita on Sept. 29, Jones said the Breeders’ Cup Ladies Classic in November is at the top of his list of priorities.

“We know we want to be back here for the Breeders’ Cup…This is a good, safe racetrack and that hasn’t always been the case.  We’re looking forward to coming back here regularly and running over this natural dirt surface.”

As for his allegiance to Napravnik, who won four races on Friday night in New Orleans , Jones was effusive in his praise.

“Rosie is a special rider.  It’s a gift from God, what she’s got.  She doesn’t realize it yet, but she’s been anointed with this talent.  She is one of the brightest young stars in this game, I can assure you.”

More Chocolate, ridden by Martin Garcia, was caught four-wide into the first turn, but settled nicely off the early pace at the rail thereafter.  He was in a striking position at the top of the lane, but was clearly second best, finishing 5 ¼ lengths clear of Brushed by a Star and Victor Espinoza.

Brushed by a Star, who was second to the winner in the $400,000 Houston Ladies Classic at Sam Houston Park on Jan. 26, finished 13 ¾ lengths in front of Great Hot and paid $2.20 to show. Snow Fall, with Tyler Baze aboard, was eased at the top of the stretch and finished last in the five-horse field.

Both Jones and Napravnik notched their first-ever wins in the Santa Margarita, which was run for the 76th time.

First post time on Sunday is 12:30 p.m.  The $100,000 Irish O’Brien Stakes, for older fillies and mares bred in California at 6 ½ furlongs down the hillside turf course, will highlight a nine-race program.