Wellington, FL – January 14, 2017 – The atmosphere in the International Arena at the Palm Beach International Equestrian Center (PBIEC) was charged with excitement Saturday night, as the women took victory over the men in the $75,000 Battle of the Sexes, presented by Wellington Regional Medical Center, during week one of the 2017 Winter Equestrian Festival (WEF). 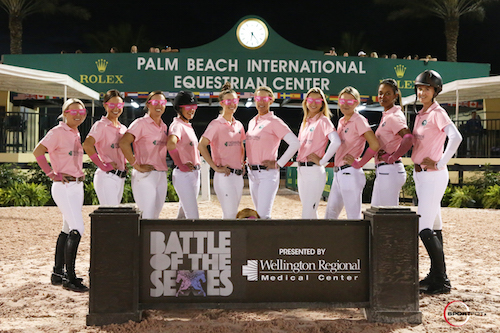 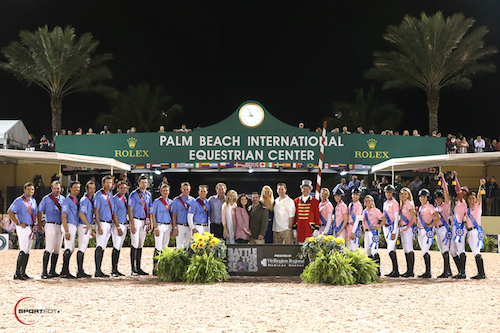 The men and women’s teams celebrate a great night with Mark and Katherine Bellissimo of Equestrian Sport Productions, Wellington Regional Medical Center COO Pam Tahan, Nick Sama, M.D., Chairman of the Department of Orthopedics, Robbin Lee, CEO, Adam Bromberg, M.D., Chairman of the Department of Emergency Services, and ringmaster Steve Rector.
The contest was held in three phases, consisting of a faults converted speed round, a relay race, and a match race. The men and women were pitted against each other in each phase over courses set by 2016 Olympic course designer Guilherme Jorge (BRA).
In round one, the men led the women seven to three in the speed rounds. In round two’s relay races, the girls picked up an additional ten points, while the men earned just five, bringing the totals to 12 for the men and 13 for the women. With one point separating them, the men and women headed into the third and final round for match races, where the women took a decisive 18 points to the men’s nine. The final tally of 21 to 31 gave the women the win. They have been victorious in the event eight out of nine years – with the class in 2015 ending in a tie. 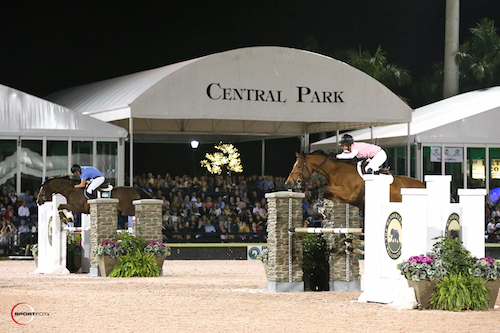 Ernest Connell and Haylie Rolfe battle it out in the match races.

Julie Welles was representing the women for her first time in Battle of the Sexes competition and had a fantastic night with her mount Centalyon, owned by Ardencote Farm. The pair jumped fast and clear to help their team earns points in all three rounds. Welles is working for 2016 Olympic Champion Nick Skelton (GBR) and two-time Olympic team gold medalist Laura Kraut (USA) this year, and saw the night as a perfect opportunity to give her mount some experience in an electric atmosphere.

“It was so much fun,” Welles said. “The horse I rode is a lovely horse that Nick and Laura own. He was just unbelievable. I just kick, and off I went. I rode him last winter, and I had not ridden him since.”

Welles continued, “His barn name is Smurf because he is so little, but he rides like a big horse. He is really fast, and he has a huge stride for such a small horse. We just cruised around.” 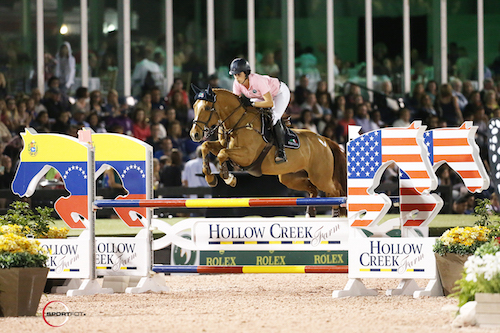 Julie Welles and Centalyon
Commenting on her team’s win, Welles stated, “To be honest, we were a little nervous in the beginning because the boys had a pretty stacked team. If you look on paper, the boys should have won. I guess I would say they got a little cocky after the first round when they kept beating us. Then we came back strong. Laura Kraut was like our cheerleader. She said, ‘You guys just have to win five of the match races. That’s all that you have to do.’ We kept counting down in the schooling area, screaming at the screen and cheering each other on.”
Abigail McArdle was aboard Plain Bay Sales’ Comeback de la Manade for her second year competing in the Battle of the Sexes and also had a fun night representing the ladies for their win.
“It was extremely thrilling,” McArdle declared. “The girls went in losing in the first round, and my only feat was to beat Andy Kocher. I didn’t think I could. Everyone told me I couldn’t, and then sure enough we did! I thought that was a good inspiration early on for the girls in the last round. 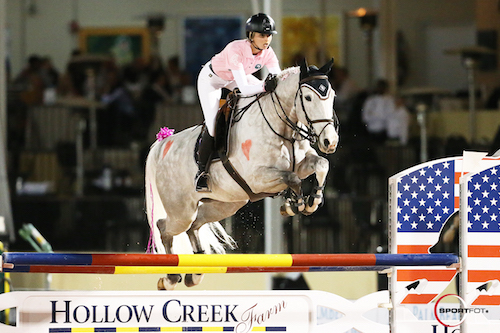 Abigail McArdle and Comeback de la Manade
“I think this is a fabulous event with great sponsors,” McArdle added. “Everyone has a lot of fun every year, and I think it is a great thing to keep doing. We had a huge crowd; the horses and the people all feel the excitement.”
Charlie Jayne was a disappointed team captain for the men Saturday night, and described his feeling after the class as “mixed emotions.”
“It was not a good night for us,” Jayne admitted. “We were up, we were down, and then we were so far away in the end. It’s fun for the crowd. It’s a very nice event for the sponsors – Wellington Regional Medical Center this year. We thank them every year, and we’ll keep coming back because of the sponsors and the spectators.” 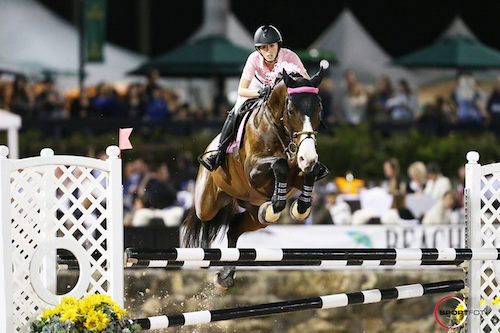 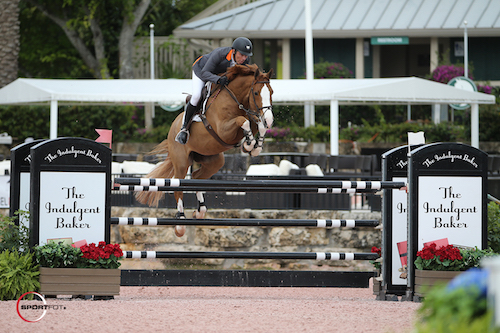