ARCADIA , Calif. (Jan. 6, 2013)—Mizdirection and Mike Smith burst through a rainbow that touched down near the top of the hillside turf course and picked up where they left off on Sunday at Santa Anita, winning the Grade II, $150,000 Monrovia Stakes at 6 ½ furlongs, besting front-running Kindle and Edwin Maldonado by a desperate nose as the 5-year-old daughter of Mizzen Mast returned to the scene of her biggest career score, the Grade I, $1 million Breeders’ Cup Turf Sprint on Nov. 3.

Now a perfect four for four down the hill, Mizdirection was sent off as the 4-5 favorite in cold, blustery conditions that produced sporadic rain and the afore mentioned rainbow, covering the 6 ½  furlongs in 1:11.94.

Sports talk superstar Jim Rome, whose Jungle Racing owns a majority share in the winner, headed a large group of revelers into the Monrovia winner’s circle.

“Right when you think maybe she’s beat, she just digs deep and finds a way to do it,” said Rome .  “And as I always say in this moment, I could not be more proud of her.  She’s got another gear.  She does not like to lose.  When she’s got a good target to shoot for, she usually turns out pretty well.”

Mizdirection, who rallied from well off the pace to defeat males in the Breeders’ Turf Sprint, was attentive to the early pace on Sunday as Kindle carved out splits of 21.70, 43.50 and 1:05.78.

“When I saw Kindle get away as well as she did and relax as well as she did, the game plan turned into me thinking that I needed to be closer to run her down,” said Smith.  “She (Kindle) actually made me idle for about a sixteenth of a mile there, where I wondered if I was going to get there.  But she (Mizdirection) gave me another surge and a nice late kick, and galloped out really well.”

With the winner’s share of $90,000, Mizdirection surpassed the $1million mark, running her earnings to $1,004,621 from a record of 13-8-4-1.  In addition to Rome , Mizdirection is owned by William Strauss, Daniel Grohs, Kevin Nish, Michael Kramek and Boris Beljak.

“Any other rider doesn’t win that race today, no way, because that mare (Kindle) ran great at Hollywood when she was the lone speed and she’s gotten better,” said winning trainer Mike Puype.  “Mike and I both feel she’ll get a mile now and we’re planning on running in the Buena Vista (Grade II, on Feb. 18).” 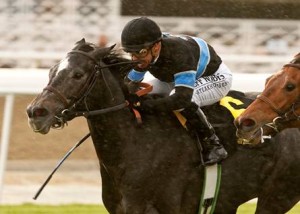 Kindle, fresh off victory in the six furlong turf Cool Air Stakes on Nov. 23, was the second choice at 9-5 and ran too good to lose on Sunday.

“She did perfect, she did everything right,” said Maldonado.  “I was hoping for Mike Smith to be farther back.  When I looked to my right before we even hit the three eighths (pole) he was almost a length behind me, that surprised me.”

Givine, the longest shot in the five-horse field at 29-1, finished a head in front of Byrama and Rafael Bejarano, paying $4.40 to show.

Live racing will resume at Santa Anita on Thursday, with first post time at 1 p.m.