WACO, Texas – Taylor Toves, all of nine weeks into his career as a PRCA card holder, didn’t think he was going to make it into the bull riding field for the Jan. 3-5 Ram Texas Circuit Finals Rodeo, but he handled the surprise pretty well.

He won the thing.

The 19-year-old Toves, from Stephenville, won the second round at the Extraco Events Center with an 87-point ride on Stace Smith Pro Rodeos’ Ugly Duck and had 170 points on two head to win the average title over Brant Atwood by five points and earn $4,719. “No question, this was the biggest win of my life,” Toves said. “I couldn’t be happier. It really came down to the two of us going into the final round, and when he bucked off just ahead of me I knew I had it won. I still wanted to ride that last bull, but that wasn’t to be.”

Toves had Texas Circuit earnings of $7,577 to finish 14th in the regular-season standings while competing on his permit. He filed his entry form “just in case something opened up” and he got the word he was in the field just two weeks before the rodeo.

Showing no evidence of nerves in his first circuit finals appearance, Toves had an 83-point ride in the first round to finish a point behind Atwood in second place and then had that 87-pointer in round two to get the win. It was just two points off his career-best score.

It was a win calculated to infuse momentum, confidence and needed cash to a rookie season that he hopes will take him far on the national stage.

There was certainly plenty of inspiration on display at Extraco, where Toves subdued a field that included reigning World Champion Cody Teel and the last two PRCA Bull Riding Rookies of the Year – Chandler Bownds and Trey Benton III – along with a couple of past Wrangler NFR qualifiers.

Toves and Teel competed against each other in the Texas State High School Finals Rodeo and the high school nationals a couple of years and have become good friends.

“Seeing what he has done the last couple of years does nothing but motivate you,” Toves said. “I’m planning to go as hard as I can for as long as I can this year … the checks I won here? They will certainly help me get down the road.”

Tony Reina, who won the three-head average in Waco with a time of 36.9 seconds, and Vin Fisher Jr., who was the year-end champion for the third consecutive year, will both compete in the National Circuit Finals Steer Roping this spring.

COLORADO SPRINGS, Colo. – Team roping header Kaleb Driggers, the 2012 reserve world champion, suffered a broken right leg on Jan. 4 as the result of an accident while herding cattle on his property in Stephenville, Texas.

“I was loping across the pasture when my horse lost his footing and went head over heels, landing on top of me,” Driggers said.

Friends drove him to Good Shepherd Medical Center in Marshall, Texas, where he was fitted for a splint and sent home after two hours.

Driggers is due to see an orthopedic doctor shortly to determine if surgery is required or he will have his leg put in a cast. 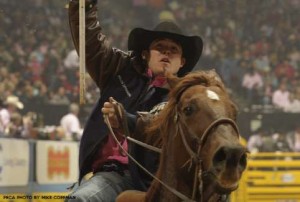 “I was told the longest I would be out would be two months,” Driggers said. “I broke off a piece of the bone on the inside of my ankle.”

Driggers, who finished just $1,211 behind Chad Masters in his bid for a first gold buckle, was about to begin a new partnership with Kinney Harrell.

This injury comes just 15 months after he broke his left leg (just above the ankle) at the Pendleton (Ore.) Round-Up.

Edward Lee Kinney, who operated a successful PRCA stock contracting business with his brother Cotton for 15 years from 1955-70, died in a Sulphur, La., hospital on Dec. 23 with his family at his side. He was 81.

Kinney Brothers Rodeo had stock selected to compete at the National Finals Rodeo 88 times from 1960-69, before selling the firm at auction in 1970. Edward Lee continued to produce youth, Little Britches and high school rodeos in the region.

Black bulls were their stock and trade. Kinney Brothers’ No. 11 went unridden for 11 years and No. 5 was ridden just five times during its career – all by ProRodeo Hall of Famer George Paul – and was used for a Justin Boots ad with Mike Greer in silhouette.

The bull they called T10 was used in a Marlboro TV commercial, but he bucked off eight-time World Champion Larry Mahan three times before they got the footage they needed.

The Kinney Brothers were known in the rodeo industry for their honesty, professionalism and the evenness of their pens.

Bull rider Dan Willis once said, “The way to go to a Kinney Brothers rodeo is to slip in and slip out,” meaning that a cowboy had a better chance to ride their stock if the animals never saw them coming.

The brothers grew up on a rice farm and cattle ranch in Choupique, La., and were active in rodeo from an early age, while also showing Black Angus and Brahma cattle. Edward Lee was the first Louisiana High School Rodeo All-Around Cowboy.

In 1955, the brothers bought out Donald Perkins’ stock contracting firm and they later bought the holdings of Gene Avery and Homer Todd, operating out of Sulphur, La.; Fort Smith, Ark., and Moffett, Okla.

In a scenario believed to be unprecedented in the more than 35 years of Circuit Finals competition, a husband and wife will be competing against each other at the Jan. 10-12 Ram First Frontier Circuit Finals Rodeo in Harrisburg, Pa. Team roping heelers Joe (fifth in the regular-season standings) and Jamie Lynn Williams (12th) of Green Lane, Pa., will make the 100-mile drive to the Farm Show Complex on Jan. 9 to chase their share of the $100,993 in prize money being offered – each “rooting for each other,” Jamie says, to fill the family coffers. It will be Joe’s 15th appearance in the RFFCFR – the last six with Chuck Smith – and the first for Jamie, 32, who qualified as a rookie. “I just filled my permit last year,” Jamie said, “and making the circuit finals was a goal from the beginning. We’ve been married six years and I’ve always gone to the circuit finals with him as support. This time we will be supporting each other.” Joe, 35, was the First Frontier Circuit year-end champion in 2007 and 2008, qualifying for the Ram National Circuit Finals Rodeo three times. He has the edge in the family based on experience and the lengthy and successful partnership with Smith. Jamie just started roping with partner Chad Stoltzfus last May and “there were three or four times when Joe and his partner bumped us out of a check,” but she says she can afford to be philosophical about it since the money ends up going into the same account … The Williams do not have the only family drama playing out at Harrisburg. In addition to competing alongside Jamie in the team roping,Chad Stoltzfus will be going head to head with his brother Wayne in the steer wrestling. Wayne’s wife, Nikkie, will be competing against Wayne and Chad’s 60-year-old mom, Joyce, in the barrel racing. The team roping also has one set of three brothers – Keith, Kevin andKenny Brown of Keedysville, Md. – in the field with Keith (header) and Kenny roping together and Kevin heeling for Ross Clatterbuck. And then there’s brothers Frankie andGarrett Fernandez of Johnstown, N.Y., with Frankie heading for Brice Stafford and Garrett heeling for C.J. Werner. In the steer wrestling, brothers Lee and Olin Ellsworth of Hudson Falls, N.Y., are both in the field, with Lee also competing in the tie-down roping … Heath Ford and J.P. Wickett have been selected Contestant Directors on the PRCA Board of Directors and they will take office at the first meeting this year, filling the spots previously held by Red Lemmel and Spud Duvall. Troy Weekley, John Barnes and Benje Bendele will retain their seats for another two-year term … Nominations for the 2013 ProRodeo Hall of Fame induction class will close on Jan. 31. The nomination form is available online atwww.prorodeohalloffame.com or can be obtained by calling 719.528.4764. ProRodeo Hall of Fame inductees are selected by a committee of former contestants and rodeo experts. More than 150 individuals are nominated each year, and selection is based on contributions to the sport of professional rodeo in any of seven categories: contestant, contract personnel, stock contractors, rodeo committees, livestock, media and notables/lifetime achievement. There have been 226 people, 27 animals and 18 rodeo committees enshrined in Colorado Springs since the Hall opened in 1979 … Five-time Wrangler NFR tie-down roper Tyson Durfey became engaged to Australian country music singer Shea Fisher on New Year’s Eve in New York City. “The original plan was to propose during the Wrangler NFR this year, but I kind of screwed things up when I didn’t make the field, so I had to come up with another plan.” Plan B? Durfey and Fisher went on a horse-drawn carriage ride around Manhattan, ending at a spot in Central Park where they could watch the fireworks as the ball dropped in Times Square. “I think she had an idea what was coming,” Durfey said, “but she was teary-eyed when she said ‘yes.’” The couple is tentatively looking at a wedding date in October, after the PRCA’s 2013 regular season comes to an end … The Cowboy Downhill skiing event, held each year in Steamboat Springs, Colo., during the National Western Stock Show & Rodeo in Denver, will be back for its 39threnewal on Jan. 21 … Patricia Lynn Brenner, the mother of PRCA steer wrestler Jake Simmons, died at her home in Greeley, Colo., on Dec. 2. She was 65.

“As long as I have good guys out there working the arena with me I don’t worry too much. We kind of take care of each other and keep the bulls off of each other. The big thing is stay out from under the hooves. Everybody always worries about the horns, but it’s the hooves that will really hurt you.”

– Bullfighter Andy Burelle, talking about his craft with the Odessa (Texas) Americanduring a break at the SandHills Stock Show & Rodeo.

*2013 Barrel Racing (through Jan. 7, 2013)
Barrel racing standings, provided by the Women’s Professional Rodeo Association (WPRA), are unofficial, subject to audit and may change. Unofficial WPRA Standings are published by the PRCA as a courtesy. The PRCA is not responsible for the verification or updating of WPRA standings.