AUSTIN, Texas – Already sort of an unofficial Wright brother, Brady Nicholes moved up into their peer group March 21 when he beat all five Wrights – and everybody else in the field – for the saddle bronc riding title at Rodeo Austin.

END_OF_DOCUMENT_TOKEN_TO_BE_REPLACED

Usually when a guy gets bumped out of the field for the Justin Boots Championships at the last moment there is anguish and bitter disappointment. Clayton Savage is fine with it. He wasn’t going to go to Omaha for the $637,188 rodeo even if he had qualified. He’s getting married next weekend.

Savage had long ago cleared off his schedule for the last week in September so he could tie the knot with his high school sweetheart, Catherine Mosher, at Grace Bible Baptist Church in Casper, Wyo. Nothing was going to interfere with that.

“I guess I didn’t really think about (when Omaha was scheduled),” Savage said. “What would I have done if I had qualified? I guess I would have doctor released out or just not entered. Bull riding isn’t everything.” 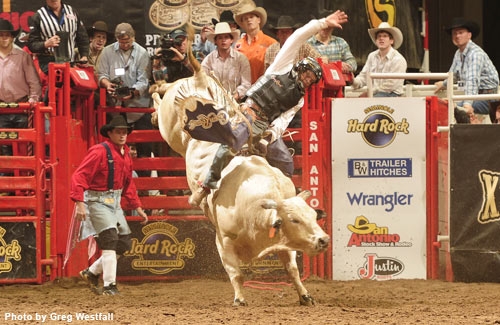 It turned out to be a moot point. Cody Whitney saw to that. Whitney earned his spot at the QwestCenter straight up. He won the Pasadena (Texas) Livestock Show & Rodeo with an 89-point ride at the final performance Sept. 20 and tied for fourth place at the Four States Fair Rodeo in Texarkana, Ark.