The four-time world champion won his first title in the Mile High City since 2003 with a 249-point score on three head before a near-capacity crowd at the Denver Coliseum.

“It feels good, and that was a great horse,” said Mote, who finished fourth last season in the Windham Weaponry High Performance PRCA World Standings. “That’s the best horse I’ve been on in a long time. I was happy to be able to do my job.”

Although Mote has won countless rodeos in his decorated career, he still knows how critical it is to capture winter rodeo victories.

“It’s really important for my season to get started off strong,” Mote said. “I feel like this is the first big winter rodeo of the season and it’s important to get a good start here. It’s a hard place to win; I won this rodeo (in 2003) and I’ve come every year since, so obviously it is not easy to win.” 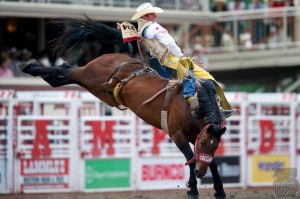 Mote, a native of Culver, Ore., held off Tim O’Connell and Steven Dent – they tied for second with 247 points – for the Denver win. Mote collected $8,063 for his performance – $7,564 for snaring the average and finals victories.

“I thought I would,” said Mote when asked if he thought he was going to register a great score on Virgil. “It was one of those (rides) that was really nip and tuck and I didn’t know if I was going to be there when the whistle blew. A lot of times, if you’re doing your job right and the horse is bucking that hard, then it should be a good score. I was consistent in the first couple of rounds and it allowed me to come back for the finals and, thank God, I had a good horse in the short round, which allowed me to make up some ground.”

According to Mote, this was his first time competing since the 2014 Wrangler National Finals Rodeo ended Dec. 13 in Las Vegas.

“I took a month off, which isn’t much time, and I’m in good shape, but actually you probably get sorer when you start back because your body is not in riding shape,” Mote said.