Lexington, KY – May 03, 2019 – Oliver Townend, the winner of the Land Rover Kentucky Three-Day Event presented by MARS EQUESTRIAN won $130,000 in prize money, a new Rolex Oyster Perpetual watch, and a 12-month lease for a 2019 Land Rover Discovery. Based on where they placed, the top 20 competitors also shared proportionally in the $400,000 pot of prize money. 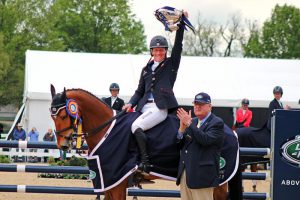 The Land Rover Kentucky Three-Day Event presented by MARS EQUESTRIAN, also presented a number of other prizes and awards. Most of the awards were supplied by L.V. Harkness, the event’s official award supplier.

Located in the heart of downtown Lexington, L.V. Harkness & Co. offers a wide selection of equestrian-themed pieces, fine tableware, decorative home accents, and exquisite gift items including china and porcelain, silver, leather and crystal, as well as beautiful trophies of all styles. The boutique store is just 15 minutes from the Kentucky Horse Park and offers free parking!

“L.V. Harkness is well known in the equestrian world for their beautiful trophies and we’re thrilled they partnered with us again this year,” said Stewart Perry, president of Equestrian Events, Inc. (EEI), organizer of the Land Rover Kentucky Three-Day Even presented by MARS EQUESTRIAN.

The groom of the winning horse, Susie Cooper, took home an engraved glass cookie jar, a bouquet of flowers, a ceramic from Ouisha, and a cash gift from Susan Domonkos in honor of her mother Jane Ginn, as well as a check for $500 from EEI.

Other special awards given out on the final day of competition included the FLAIR Protect and Perform Award given to the highest-placed horse and rider pair using FLAIR nasal strips during both the cross-country and show jumping phases. This year’s winning pair was Oliver Townend and Cooley Master Class.

The Equis Sportsmanship Award was given to Buck Davidson, who fell and broke his collarbone on his first horse on Cross Country, but who stayed on the grounds to help and cheer on his fellow competitors. The prize of luxury clothing and tack from Equis Boutique is chosen by the competitors and is given to the rider who “throughout the competition exemplifies the spirit of the event, serves as a good role model for the sport, respects others and overall exudes a positive demeanor and attitude.”

The MARS EQUESTRIAN Best Turned Out Horse Award for the best-turned out horse at the first horse inspection was awarded to Leslie Law’s Voltaire De Tre’ and his groom Isabel Holden. The Shapeley’s Groom’s Award is given to the best groomed horse in the show jumping phase. The winner this year was Emma Ford, groom for Phillip Dutton’s Z.

The Land Rover Kentucky Three-Day Event presented by MARS EQUESTRIAN will be broadcast on NBC on Sunday, May 5, from 12:30-1:30 p.m. EDT. It will also be broadcast on NBC Sports Network on June 23, from 1:00-2:00 p.m. EDT. USEFNetwork.com will livestream the competition in its entirety – including the two CSI jumping classes – in the U.S. and abroad. Competition will also be archived and available on demand.