Tryon, NC USA – September 17, 2018 – Great Britain’s eventers claimed a golden double on an unforgettable day of action at the FEI World Equestrian Games™ Tryon 2018 (WEG). Rosalind Canter not only led the British team to glory – their first world Gold medal since 2010 – but she also won the Individual title with her brilliant 13-year-old gelding, Allstar B. 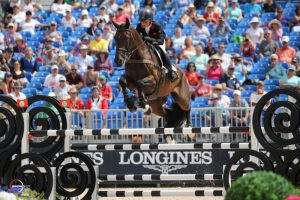 Ros Canter and Allstar B

It is the first time Britain has won both competitions in one single FEI World Equestrian Games™, and 32-year-old Canter is the first British Individual Gold medalist since Zara Tindall 12 years ago in Aachen, Germany. A breath-taking finish to both events in the Mars, Inc. Eventing saw Canter enter the U.S. Trust Arena knowing that she could afford to have one jumping fence down and Britain would still beat eventualrunners-up Ireland to top spot. 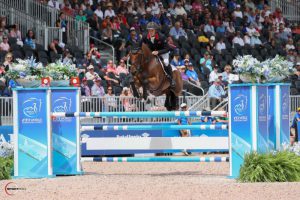 She looked as though she was the coolest customer on show, delivering an immaculate clear round, and also retained the second spot individually before leader after Cross-Country, Germany’s Ingrid Klimke, with SAP Hale Bob OLD, had the last fence down and dropped from first to third behind Canter and Ireland’s Padraig McCarthy, on Mr. Chunky. Canter remarked, “Allstar B was absolutely amazing. He was an absolute hero.”

“I had an amazing experience in there,” she said. “I kept saying to myself just let him do his job and I am so proud. He is just phenomenal. There were quite a few tears when I found out, which isn’t normal for me. It’s just incredible for me and the whole support team behind Team Great Britain. It’s just the most incredible feeling, and a very surreal day.” Ros Canter and Allstar B after they clinched Team and Individual Gold for Great Britain.

British Eventing Performance Manager Richard Waygood added, “It’s been an amazing day in the office, really great team work. They all pulled together. They all went in there for the team and stuck to the system. It was close at the end, but even before Ros jumped the last fence, I knew she had it. Our primary objective coming here was qualifying for Tokyo (2020 Olympic Games), and our next objective was to win as many medals as possible, and we’ve achieved both goals.” Ireland Chef d’Equipe Sally Corscadden said, “This is huge for us. We are making history today. I had belief that we could be competitive here, and we just stuck to our goal.” But while Ireland might have been the surprise package, 2014 World Champions Germany and their team of Klimke, Julia Krajewski, Kai Ruder and Andreas Dibowski had to settle for a finish comfortably outside of the medals. Inspired by their coaching mastermind to London 2012 Olympic Gold medal glory, Chris Bartle, Germany could only look on as Bartle achieved his latest triumph – as coach of the British team.