Skip to the content
Las Vegas (USA), 16 April 2015
Irish wonderboy, Bertram Allen, wins first round of Longines Final with Molly Malone
by Louise Parkes
Ireland’s Bertram Allen and the brilliant grey mare, Molly Malone, won the opening Speed competition of the Longines FEI World Cup™ Jumping 2015 Final at the Thomas & Mack arena in Las Vegas, USA tonight. With a performance that mirrored his surprise success on the opening day of the Alltech FEI World Equestrian Games™ in Normandy, France last September where he eventually placed individually seventh, the German-based 19-year-old simply left the rest trailing in his wake when going 32nd in the field of 40 starters.
Runners-up were the 2012 FEI World Cup™ Jumping champions, America’s Rich Fellers and the amazing Irish-bred stallion Flexible who, tonight, belied his 19 years of age with a fantastic tour of Anthony d’Ambrosio’s 13-fence track. And there was a divide for third spot when both Patrice Delaveau (Orient Express HDC) from France and Dutchman Jur Vrieling (VDL Zirocco Blue NOP) cleared the line in exactly the same time. Olympic champion, Switzerland’s Steve Guerdat, lined up fifth with Albfuehren’s Paille while Frenchwoman Penelope Leprevost filled sixth spot following a copybook round with Vagabond de la Pomme.
No easy task
The course for tonight’s Speed contest consisted of 13 fences, and in the tight confines of the Thomas & Mack arena it proved no easy task to leave all the poles intact. But another budding young talent, pathfinder 19-year-old Jos Verlooy from Belgium, showed it was perfectly jumpable when setting the standard with a great clear in 68.27 seconds with Domino. The first element of the double at fence five, and the triple combination at fence eight were the bogeys of the evening, but plenty of mistakes were also made elsewhere as riders tried to find the quickest route home. And it was the target set by third-to-go Delaveau, and matched by Vrieling who also cleared the line in 66.44 seconds when 20th into the ring, that they were all chasing right down to the closing stages. 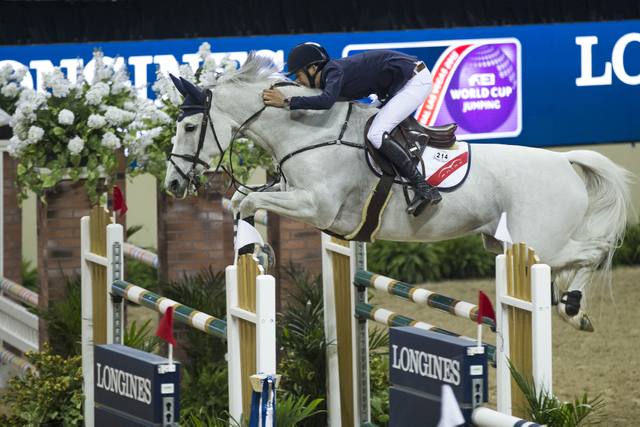