MARTIN GARCIA, DORTMUND, WINNER: “This is my first win in the Santa Anita Derby. There are a lot of ‘firsts’ with him for me. He was really comfortable. The main thing for me today was to break well and put him in a good position.

“Even though he’s won all his races, he’s still learning. He can play around a bit but when someone comes to him, or I ask him to go, he becomes push-button and he just takes off.

RAFAEL BEJARANO, ONE LUCKY DANE, SECOND: “I had a good trip. No excuse. I put him right behind with the speed, but the winner was just the best. He was much the best. My horse was still running to the end. My horse ran really good, really good. He surprised me today. He made a good move at the end.

(The best thing about his performance?): “This will help a lot in the (Kentucky) Derby. I think this horse can run all day. He’s still learning. He’s a big horse, good-sized for two turns. I think this race will be a lot of help.” 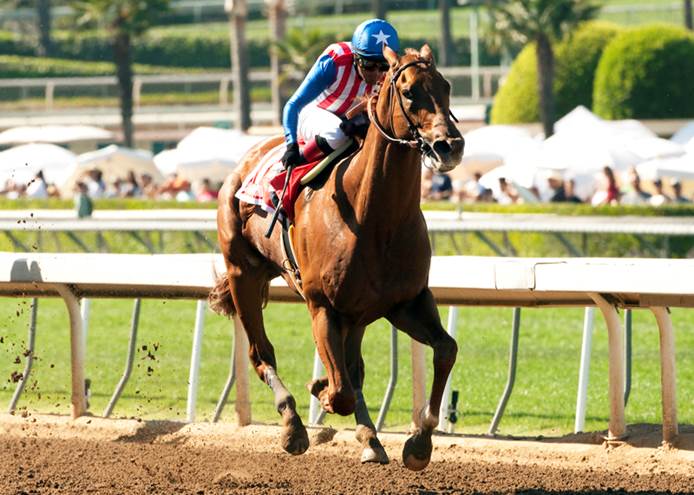 MIKE SMITH, BOLO, THIRD: “We didn’t win today, but the good thing is that we know how talented he is on the grass. So we’ll just have to regroup and start our campaign back on grass. We couldn’t have had a better trip – it was perfect. We went three wide, but I was fine with it. I just didn’t have the horse to go with him. He just struggled with the surface.”

BOB BAFFERT, DORTMUND, WINNER, AND ONE LUCKY DANE. SECOND: “It’s exciting. I’ve been in this position before. You get excited when you know you have a legit contender, just like last year when At Sherman went through it with California Chrome.

“The feeling is like we’ve been here before; just enjoy the moment because the next race (Kentucky Derby on May 2) is going to be the one. It’s good to see this horse just really developing the way he has from his first start. I just love the way he ran today.

“When we bought him, he looked like a really good horse, but he was just a big horse, and sometimes they don’t turn out. He’s a big, long-legged horse. When he made the lead and when he gets by himself like that, he’ll idle on you a little bit, so he had to keep going.

“One Lucky Dane, he’s a good horse. He showed that last time. This distance is not going to be a problem for him. He’ll go to the (Kentucky) Derby. He qualified in Bob Baffert’s eyes (in addition to points). I don’t need 40 points. They’ve got to qualify in my eyes.

“They’ll ship out of here maybe in another couple weeks. I’ll make that call later.”

Asked about American Pharoah and his race next Saturday in the Arkansas Derby: “This is the time of the year where we take nothing for granted, we work hard, we have a great team and American Pharoah is doing fantastic. We want to get there in top form and healthy. That’s the battle right there. We have good horses. I can’t believe I’m so fortunate to be in this position with two outstanding 3-year-olds like I have.”

KALEEM SHAH, OWNER OF DORTMUND:  “Just to have a horse in the Santa Anita Derby is a thrill, but to run this well and win it, is unbelievable. Ever since the San Felipe, this has been like March Madness for me. To be going to the Kentucky Derby with an undefeated horse like this and to be compared to horses like Seattle Slew and Smarty Jones is just amazing. We have these colors (red, white and blue) because I am very patriotic. I have strong feelings about this country ever since I became a naturalized citizen (in 1989).

WHAT ABOUT THE MEDIA CIRCUS LEADING INTO THE KENTUCKY DERBY AT CHURCHILL DOWNS? “I’m looking forward to everything. Those are good problems to have. It means you have a horse in the race.”