Skip to the content
Las Vegas, Nevada, – March 7, 2015 – It is hard to refer to Brennon Eldred as a rookie bull rider in Championship Bull Riding. Beating the odds of outscoring four World Champions, the twenty year old cowboy from Sulphur, Oklahoma, riding in his first year with CBR proved why. Eldred, the only cowboy to ride three bulls, thrilled the standing room only crowd at the South Point Hotel Arena for the Tuff Hedeman Vegas Shootout presented by Boot Barn & Discount Tire. With his outstanding performance on the ninth stop of the Mahindra Road To Cheyenne Tour, Eldred not only stepped up to the number two ranking in the Championship Bull Riding (CBR) World Standings, but more importantly to him, he moved several steps closer to his dream of winning a gold buckle in Cheyenne.

“It is never easy to ride three bulls, but I drew great bulls tonight and my position coming back second into the final round allowed me to pick the same bull I had in Conroe last year and was 91 points on”, said Eldred about his selection of Mike Rawson’s Raven’s Mistake to win the Shoot Out Round and the Las Vegas title.

Eldred, who earlier in the season won the CBR event in Hobbs, New Mexico, qualified for his first National Finals Rodeo in 2014 and with two CBR Mahindra Road to Cheyenne event titles to his name in 2015, he has now ridden 50 percent of the bulls he has attempted in CBR competition. More impressively Eldred has earned 90 point plus rides five times during his CBR rookie season, and is well on his way to his first CBR World Finals in conjunction with Cheyenne Frontier Days in July in Wyoming.
Eldred was among the nine qualified rides in round one. Striking first was rookie Taryl Smith, Litchville, North Dakota, with an 89 on Mike Seller’s Smooth Talker. Eldred then turned in 90 points on Lyndal Hurst’s NFR bull Iron Horse and shared the number three ranking of the round with Juan Alonzo, who recently returned to the United States after serving five years in the United States army. Alonzo, riding Mike Rawson’s Little Shyster, had a great trip spurring over half of the ride on Rawson’s bull that resembles an ATM machine for cowboys. Former PBR World Champion Kody Lostroh who took the lead at the beginning of section II and finished first in round one, shared the round honors with the rookie Lane Toon, both earned 90.5 points.
Lostroh, making his first CBR appearance rode 9100 Kojack, a two time NFR bull who has won not only cowboys a lot of money, but his owners as well. In an odd twist of fate, Toon, who also rode Kojack at the season opener in Jackson, would tie the round and advance thanks to another Championship Pro Rodeo bull Gold Buckle. 050 Gold Buckler, who began his stellar career on Lyndal Hurst’s trailer, assisted a bull rider to the 90 point plus club for the fifth time this year on the Road to Cheyenne.
Rounding out round one would be Corey Maier and Chris Roundy who would advance with 89 points each.  Eighteen year old Wyatt Rogers, advanced with 87 on Rawson’s Moonshine, joined Ardie Maier who was the ninth man to advance on a qualified score with 83.5 on JQH’s Raptor. 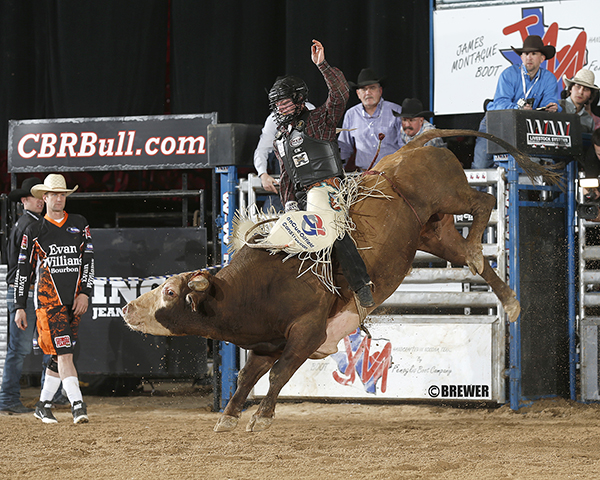 High Resolution attached, Web and FB version available up on request.  Additional photos available.
About Championship Bull Riding –
Located in Weatherford, Texas, Championship Bull Riding (CBR) is an organization dedicated to promoting and preserving the very best elements of the sport. Under the direction of bull riding icon Tuff Hedeman, CBR has grown into an organization that works to put the best riders on the best bulls, delivering world-class qualified rides. Bull riders start in the Horizon Series earning points to move onto the elite Road to Cheyenne Tour.  The Road to Cheyenne Tour culminates in July in Wyoming at the legendary Cheyenne Frontier Days where the world champion earns a $100,000 bonus. The CBR Bull Team Challenge is also part of the tour events where stock contractors bring their best bulls and compete for annual cash prizes that total over $1 million. Providing opportunities for contestants, stock contractors, fans and sponsors is why CBR is the REAL COWBOY SPORTtm. CBR is featured at over 70 venues across the United States with national television programming on the Fox Sports Networks for 26 consecutive weeks in prime time. For more information visit cbrbull.com or call 817-626-BULL (2855).