It was a three-man Winning Round. After Christoph Sandmann and Boyd Exell had driven theirs, IJsbrand Chardon entered the arena with his special indoor team. The Dutch held an advantage of approximately three seconds over Exell and flew through the course, determined to win the coveted title which has eluded him since 2006. Unfortunately however his carriage lost balance in the left turn and Chardon had to make a correction. This caused his right leader horse to come out and spectacularly jump over the start/finish element. As Chardon had come too close to the next marathon type obstacle, he could no longer correct the situation and went through the wrong gate. He had no other choice except to retire.

Boyd Exell drove two wonderful clear rounds in full concentration and put the pressure on last man Chardon. Exell was especially pleased with his right wheeler horse, the 25-year-old Carrington Park Ajax affectionately called Junior, who has now been retired from the sport. Junior has been part of Exell’s team at every FEI World Cup™ Driving competition. He 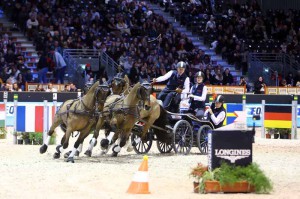 thanked the exceptional gelding by escorting him out of the arena, walking beside him while his navigator Michelle drove the team.

Christoph Sandmann was very pleased with his second place. The multiple German champion and organiser of a CAI3* at his home in Lähden did not take any risks in the first round and went full speed in the Winning Round, knowing he had nothing to loose since the difference between him and the two leading drivers was too big. His clever tactics resulted in a wonderful third place for the experienced driver, who had not competed in Bordeaux since the series’ first season in 2002.

Quotes:
Boyd Exell (AUS): “Once we got in our zone, it felt like the old winning wheel again. Because of my injured hand, I had to sharpen the bit settings and I could not play with them as much as I would have liked to. Poker, who is only seven, was a true member of our team today but the highlight for me really was the retirement of Junior. I am so thrilled for him and so happy he finished his career with a win.”

Christoph Sandmann (GER): “I am very happy with my second place. I did not compete in the World Cup last season and I had a special indoor team for this season with which I am very pleased.”

IJsbrand Chardon (NED): “I was very fast and I believe I was even five seconds ahead of Exell when fate struck again. I feel terrible that this has happened, I really wanted to win. But this is the game and I accept it.”