A total of 73 riders contested the $30,000 Ruby et Violette WEF Challenge Cup Round II on Thursday, January 15.  The starting field was whittled down to 13 for the jump-off, where Lamaze and Rosana du Park were the second pair back into the International Arena.  The 2008 Olympic Champion laid down the gauntlet, posting a clear jump-off performance in a time of 39.78 seconds that would prove to be unbeatable.  As he was wearing SSG ‘Digital’ riding gloves in both the first round and jump-off, Lamaze also picked up a $3,000 bonus from SSG Gloves. 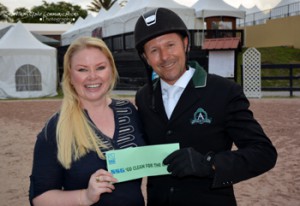 “It’s great,” said Lamaze of the SSG Gloves “Go Clean for the Green” promotion.  “Like I said last week, the bonus is great, and the gloves are great to wear on top of it!”

Having also won the $3,000 bonus during opening week, Lamaze has now claimed a total of $6,000 in bonus money in recognition of his loyalty to the SSG Gloves brand.

“Can we meet like this every week?” joked the affable Canadian.

SSG Gloves will continue to offer a $3,000 bonus in each of the weekly Ruby et Violette WEF Challenge Cup Series events, as well as a $1,000 bonus in the High Amateur-Owner Jumper Classic and the Sleepy P Ranch High Junior Jumper Classic competitions.  If the winning rider in any of these three competitions is wearing SSG ‘Digital’ style gloves with the SSG horse head logo clearly visible, they will be presented with the SSG Gloves bonus during the awards presentation.  A total of $60,000 in bonus money is on offer from SSG Gloves at the 2015 Winter Equestrian Festival.

SSG ‘Digital’ riding gloves are available for purchase at numerous Wellington locations including Tackeria and Dover Saddlery, as well as on-site at the Winter Equestrian Festival show grounds at various retailers including Running Fox and Hadfield’s Saddlery.