ARCADIA, Calif. (Jan. 8, 2015)—Trainer Eric Kruljac’s longshot Not too Shiny attended a fast pace and prevailed in a desperate finish under Tyler Baze to take Thursday’s $60,000 allowance feature at Santa Anita by a head while covering 6 ½ furlongs down the track’s hillside turf course in 1:13.26.

A close third crossing the dirt at the top of the stretch, Baze bided his time inside and shifted three off the rail a furlong out.

“She loves the hill,” said Baze.  “I liked her chances looking at the Racing Form even though I knew she was the longest shot on the board.  Looking at the Fo

rm though, it set up perfect.  A lot of horses can come from way out of it.  Two horses hooked up right in front of me and I was able to have just a beautiful trip.”

-bred mare by Modigliani notched her second hillside win and her third overall from seven starts.  With the winner’s share of $36,000, she increased her earnings to $97,520. 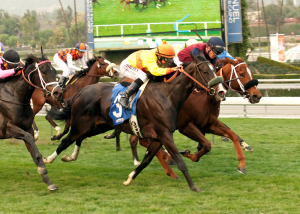 “I thought we got caught but then I looked at it and she dug in and got the bob on the wire,” said Kruljac.  “She loves the grass.  I don’t know why I ever ran her on the dirt…She’ll never see the dirt again, as long as she’s with us.  I don’t know where she’ll go from here.  She’s got a half brother that has won five, or six hundred thousand sprinting in Europe.  She’s got a little pedigree.  We’ll keep her here (on the hill).”

Irish-bred Royal Temptress, who came rolling from far back under Mike Smith, was off at 9-2 and finished second, a half length in front of Air of Royalty  and paid $6.00 and $4.00.

Ridden by Edwin Maldonado, Air of Royalty pressed the pace, made the lead briefly inside the sixteenth pole and held off Black Bird Rock by a nose for third.  Off at 4-1, Air of Royalty paid $4.40 to show.