Wellington, FL – January 2, 2015 – International Polo Club Palm Beach’s signature palm trees and lush, manicured fields provided the perfect backdrop for the first high-goal games of the 2015 season. The first match between Casablanca and Coca-Cola demonstrated the strength of the young Casablanca players. In the second face-off of the day, Villa del Lago pulled out a win over the Lechuza Caracas team.

The Casablanca team, 1-golaer Grant Ganzi, 8-goaler Nic Roldan, 9-goaler Martin Novillo Astrada, and 2-goaler Juancito Bollini, proved to be a force on the field in their first match against Coca-Cola. The Coca-Cola 20-goal team includes 2-goaler Gillian Johnston, 6-goaler Sugar Erskine, 8-goaler Julio Arellano, and 4-goaler Mason Wroe. Erskine was forced to sit out the Herbie Pennell Cup due to an injury and was replaced by Kris Kampsen, rated 6 goals. 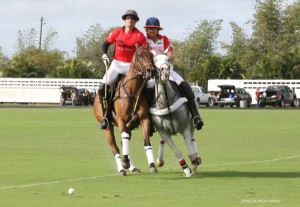 Roldan, one of the highes

t rated American players, got the ball rolling with the first goal of the game. Teammate, Bollini, added another score to the Casablanca tally. Coca-Cola was quick to answer back, and sent Kampsen streaking down the field to pop one through the goal posts. A foul committed close to the goal went in favor of Casablanca. Novillo Astrada converted the penalty two with ease. Each team scored once more to close out the chukker with Casablanca on top 4-2.

In an evenly matched second chukker, each team scored two goals. Roldan and Novillo Astrada each added a goal from the field for Casablanca. A goal by Kampsen and a penalty three shot by Arellano aided the offensive effort of the Coca-Cola team. Casablanca maintained their two-goal lead, 6-4, at the end of the 2nd chukker.

After sitting down for halftime, players from both teams remounted, looking to bring home the first win of the season for their team. A safety called against Casablanca gave Coca-Cola the opportunity to score. Arellano lofted the ball high through the air, adding the goal number 5 for the Coca-Cola team. A foul against Coca-Cola proved to be costly as Novillo Astrada easily sunk the penalty four shot for a goal. The fourth chukker ended with Casablanca in the lead 9-5.

Casablanca came to the field with confidence and dominated the fifth chukker. Bollini, Novillo Astrada and Roldan each added a goal to further their lead to 12-5.

Coca-Cola scored the first goal of the sixth chukker on a penalty shot. Casablanca left nothing to chance, scoring two more goals to end the game up 14-6.

“We all executed as we planned and that’s a very big advantage,” said Ganzi. “That’s how you really win a game.”

“We set up exactly what we wanted to do and we were able to execute that,” agreed Bollini.

Ganzi said that the team started practicing five days ago to prepare for their first outing. Roldan began playing with Novillo Astrada recently in Aspen, adding to the fluidity of their teamwork. 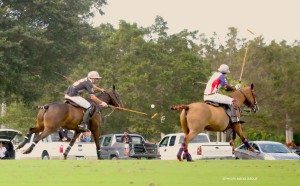 “It is always important to start off the season like this,” Roldan said. “It is the first game and it sets the tone for the rest of the season. Grant and Juancito just had the best games of their lives in high-goal. I’m getting to know Miguel so it was really fun. He makes it really easy on the field.”

he game was an even match from the first bowl in. Espain snagged the first opportunity to score. Obregons flicked the ball through the uprights to tie the score 1-1.

The second chukker began with players looking to gain an advantage for their team. Nero expertly converted a penalty goal to bring Lechuza up by one goal. Obregon ran down the field, scoring his second goal of the day on a fast pony. Pieres, who just arrived from Argentina this morning, added a goal of his own to put Villa del Lago on top 3-2.

Villa del Lago pushed forward on the attack to widen their lead in the third chukker. Obregon easily scored again, followed by a penalty goal and a field goal by Pieres to end 6-2.

A right of way violation near the goalmouth gave Nero another easy shot from the penalty line. He tapped the ball through to widen their lead. Six-goaler, Lusaretta, picked up a loose ball on the run and tapped one through for Lechuza to put them back in the hunt. Nero and Pieres each scored a goal from the field to close out the fourth chukker 8-4

Nero streaked through the fifth chukker scoring two goals. A third goal by Alberdi brought Lechuza to within one goal of Villa del Lago.

In the crucial sixth chukker, players raced up and down the pitch looking to secure their win. Lusaretta drilled a ball through the goal to give Villa del Lago a slight advantage. Nero answered back, stealing the ball and running across the field to add another goal to Lechuza tally. A final goal by Pieres sealed the deal for the Villa del Lago team, winning the match 10-8.

“They had Juan Martin Nero, one of the best players in the world,” said Pieres. “He scored those two goals to come back in the game but luckily, we scored and we won the game.”

Obregon agreed and commented on how great he thought the horses played. 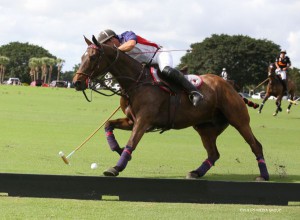 “For now I am looking forward to hopefully winning on Sunday,” Obregon said.

Villa del Lago will face off against Casablanca on Sunday at 3 p.m. at the Herbie Pennell Cup Final. A consolation match between Coca-Cola and Lechuza will be held on Sunday at 10 a.m.