COLORADO SPRINGS, Colo. – Sometimes life can be just a little bit too much like a roller coaster ride.

Just one day removed from being honored with a banquet in his hometown of Kountze, Texas, reigning World Champion Bull Rider Cody Teel dislocated and shattered his left elbow while competing at an unsanctioned rodeo.

He underwent a four-hour surgery on March 7 in which doctors inserted two plates and 10 screws. In the short term, Teel will be wearing a soft cast and will start very light rehabilitation work shortly in Beaumont, Texas. 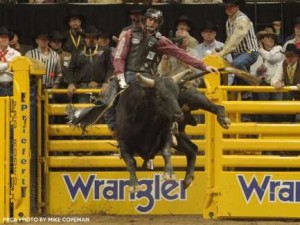 Teel was released from the hospital on March 10 and returned home to Kountze.

“The doctors are saying it will be 2-3 months before he can do any heavy duty physical therapy,” said Teel’s mother, Kami, “and that he’ll need more time to be ready to compete. As hard-headed as Cody is, he’s talking about being back in June, in time for the Reno (Nev.) Rodeo or earlier.

“Of course, when he had abdominal surgery, the surgeons said he wouldn’t be able to ride bulls for a year and he was back in three months. He has proved people wrong before.”

Teel became the second current world champion to undergo surgery in as many weeks. Team roping header Chad Masters blew out his knee March 1 at the Timed Event Championship in Guthrie, Okla., and is benched for 6-8 months.

The Hardin County Commissioners honored their favorite son for his achievement with a proclamation making March 5 Cody Teel Day and his hometown named him Citizen of the Year at a special Kountze Chamber of Commerce banquet that night.

ARCADIA, Fla. – Saddle bronc rider Cort Scheer knew once he saw the stock draw that he had history on his side and he wasn’t about to let the opportunity slip away.

Scheer, a two-time Wrangler National Finals Rodeo qualifier, rode Frontier Rodeo’s Maple Leaf for 89 points and the win at the March 8-10 Arcadia All-Florida Championship Rodeo – just as Cody DeMoss had done a year ago in the same arena.

Well, actually, it was a bit better than what DeMoss did in 2012; he rode Maple Leaf for 85 points to get that win.

“That horse has been good for a long time,” Scheer said. “He’s a bucking son of a gun. I just had to stay on him. Cody Taton had a good ride on the horse in Jackson (Miss.), so he was able to help with how much rein I needed.

“It was challenging all the way. I’ll be honest, I got a little bit loose there for a second, but I managed to pull it together.”

The judges rewarded Scheer’s effort with 45 points out of a possible 50 and Maple Leaf, a Wrangler NFR veteran himself, earned scores of 21 and 23 from the PRCA officials. 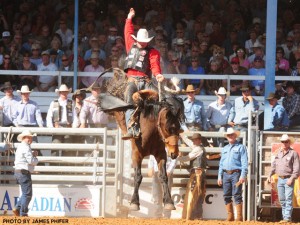 Scheer earned $3,255 for the win and moved up from seventh to sixth in the saddle bronc riding world standings.

While he was at it, Scheer took a shot at earning the first all-around title of his career in Arcadia, entering the team roping with fellow Nebraska saddle bronc rider and traveling partner Travis Sheets. They stayed among the leaders for the first two days, but ultimately got bumped out of the money.

“I roped and bulldogged in high school and college,” Scheer said, “but this was the first time I team roped in a PRCA rodeo. When I first bought my card I wanted to concentrate on my saddle bronc riding and see if I could establish myself.

“This is just for fun. We’ll probably do it again somewhere down the road and I’d like to enter the bulldogging once in awhile, too. That’s kind of a goal.”

The biggest bit of final-day drama came in the bull riding where Josh Barentine, the leader at the start of the day with a score of 88 points (good enough to win here a year ago), got bumped all the way down to fourth place during a performance that had three 90-point rides.

Clint Craig, of Mena, Ark., ended up with the win. He had a 91-pointer on Frontier Rodeo’s Sponge Bob, a point better than Rookie of the Year frontrunner Cooper Davis and Cole Echols.

Lane also won the all-around title, pairing his tie-down roping win with a second-place finish in team roping to bank a total of $3,072.

The rodeo set a single-day attendance record with an overflow crowd of about 8,000 on March 9 and also broke the overall record with more than 21,000 spectators for the three days.

“I’ve been president of the rodeo committee for 14 years,” Don Hall said, “and this is the first time we’ve had to turn people away. We finally sent volunteers down to the intersection to let people know that there was just no more room.”

• Minnesota’s Matt Pojanowski was the show stealer at the North Dakota Winter Show in Valley City, N.D., with a winning 90-point bull ride on Dakota Rodeo Company’s Double Vision. It was the third ride of 90 points or better in Pojanowski’s career and one point off his career best achieved back in 2007.

Ehmann, of Mead, Colo., runs the Firm Body Boot Camp out of a gym in Loveland, Colo., where he teaches his Cowboy Fit Zone methodology. He has also developed a product he calls Lose 12 Inches with 12 Workouts that he markets on multiple websites.

Ehmann presented his enthusiastic pitch to the full panel of six entrepreneurs on the network television show, offering 25 percent of the profit from his business in exchange for the $120,000 in capital he was seeking.

Daymond John, the president and CEO of the FUBU clothing company, made the investment based as much on Ehmann’s personality and utter commitment to succeed as he did on the business model.

The 41-year-old Ehmann bought his PRCA card in 1999 and competed in ProRodeo through the 2006 season.

Shark Tank, based on a show originally developed in Japan, features a panel of entrepreneurs and business executives called “sharks,” who consider pitches from other entrepreneurs seeking funding for their business or product.

In the March 8 episode, Ehmann appeared alongside groups that proposed throwing dance parties for kids with a traveling disco and the production of a damage-proof cell phone.

ProRodeo Hall of Fame inductee Paul Tierney has been honored by the Omaha World Herald as one of the 100 greatest athletes in Nebraska’s history. Tierney was recognized for a career that has lasted more than 40 years and produced a tie-down roping world championship in 1979, an all-around gold buckle in 1980 and 14 trips to the National Finals Rodeo. “Anytime you get recognized like that for achievements in life, it’s kind of like frosting on the cake,” Tierney told the SandHills Express of Broken Bow, Neb. “In high school I had become a state champion in all-around and calf roping. I realized in my college years that if I made the sacrifices and applied myself, I could do this.” Tierney was born in Kearney, Neb., and grew up in Broken Bow. He was ranked 95thby the World Herald, the only rodeo star on a list that was headed by St. Louis Cardinals pitcher Bob Gibson, Chicago Bears running back Gale Sayers and pitcher Grover Cleveland Alexander, who finished his career tied for third in career wins (373 for the Phillies, Cubs and Cardinals) … With Pete Carr’s purchase of Classic Pro Rodeo from Scotty Lovelace now finalized, the stock contracting company has been renamed Pete Carr’s Classic ProRodeo. The March 7-9 Marshall (Texas) Pro Rodeo was the first event produced under that name … The Industry Outreach Department of the PRCA offered a unique interactive rodeo experience to the fans at last month’s San Antonio Stock Show & Rodeo. The ProRodeo Hall of Education allowed fans to meet with rodeo cowboys, try their hand at roping a dummy and see what a bareback riggin and bull rope felt like. The display also featured information on the history of ProRodeo as well as information on the livestock involved. The ProRodeo Hall of Education was a stop for the Boy/Girl Scout Day scavenger hunt on Feb. 10. Participants were encouraged to learn more about ProRodeo with several rodeo history and general knowledge questions. The PRCA distributed pencils, stickers and rodeo education booklets to participating scouts … The Mohave County (Ariz.) Supervisors have allocated $50,000 for improvements to the Mohave County Fairgrounds in Kingman, where the PRCA-sanctioned Andy Devine Days Rodeo has been staged for the past 28 years … Rex Phebus, who served on the Clovis (Calif.) Rodeo Board of Directors for more than 50 years and was manager of the Clovis Veterans Memorial District for 30 years, died in his beloved hometown on March 1. He was 92. Phebus was recognized with a plaque by then-PRCA Commissioner Lewis Cryer for his long service to rodeo, the Veterans Memorial Building in Clovis is named in his honor and he helped establish many youth and senior citizen programs in his community. “He had his hands in a little bit of everything,” longtime friend and former Clovis City Councilman Stan King told the Fresno Bee. “If you wanted (to know) anything of historical reference on Clovis, he was the go-to guy. He definitely was ‘Mr. Clovis.’” … PRCA photographer Molly Morrow will have her work exhibited March 14-17 at the Great Western Living and Design Exhibition in Great Falls, Mont. … The Pioneer City Rodeo in Palestine, Ill., is returning as a PRCA-sanctioned event for the first time since 2008. It is best remembered in rodeo history as the site of the 98-point bull ride made by ProRodeo Hall of Fame inductee Denny Flynn on Steiner’s Red Lightning in 1979 – a world record that stood for 12 years … For the 56th year, the Mesquite (Texas) ProRodeo Series will be heralded with a parade through the downtown streets. Entries from area businesses are being accepted through March 29.

– ProRodeo Hall of Fame bull rider Charlie Sampson, telling the Scottsbluff (Neb.) Star Herald the valuable lessons he learned from one of his early mentors.

*2013 Barrel Racing (through March 11, 2013)
Barrel racing standings, provided by the Women’s Professional Rodeo Association (WPRA), are unofficial, subject to audit and may change. Unofficial WPRA Standings are published by the PRCA as a courtesy. The PRCA is not responsible for the verification or updating of WPRA standings.