“He knocked it out of the park today, he really did, it was extremely impressive,” said Smith, who tasted victory in the Big ’Cap for the first time.  “He broke really well today.  I basically waited a little to see what Handsome Mike (off at odds of 30-1 from post position two with Mario Gutierrez) was going to do out of the gate and when I saw that I had the jump on him, the advantage, I got on over (towards the rail) as quick as I could just to impede him a little bit without bothering him in any way, and it worked out really well.

“He got into this great rhythm he has, he’s got a real high cruising speed, and he was well within himself the whole way around there really.”

Owned by Joe Torre’s Diamond Pride Stable (Torre was unable to attend due to a World Baseball Classic managing commitment in Arizona), the Lanni Family Trust, Mercedes Stable LLC and Bernard Schiappa, Game On Dude, a 6-year-old Kentucky-bred gelding by Awesome Again, picked up $450,000 for the win, boosting his overall earnings to $3,702,158.  His record now stands at 24-12-5-1.

“I think Mike really gets along with him well,” said Baffert.  “He must have given him a breather along there somewhere…but the thing about ‘Dude,’ he’s got to go along at a fast clip.  The horse is just a great horse.  What he showed today was amazing.

“I was waiting to see what was going to happen.  Mike didn’t see anybody going, so he just took the lead.  He was going to cruise right along there (anyway). If you go with him, you’re not going to get anything.  He likes competition, and he was still going pretty fast.  I’m so proud of him the way he’s developed into such a great horse.” 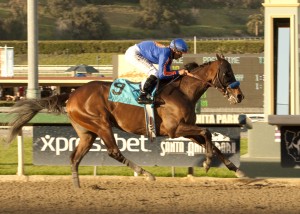 Clubhouse Ride, dismissed at 27-1, got a ground saving trip under Rafael Bejarano and although he was no match for the winner, prevailed in a desperate nose photo for second over Called to Serve, who was the third choice in the field under Gary Stevens at 4-1.

“I’m proud of him, he ran well,” said Lewis, who ran third behind Game On Dude with longshot Quindici Man in 2011.

Called to Serve, who shipped in from Belmont Park for trainer Nick Canani, was 3 ½ lengths off the leader passing the half mile pole, split horses turning for home and finished 1 ½ lengths in front of last year’s Big ’Cap winner, Ron the Greek.

“There was no beating Game On Dude,” said Stevens.  “I should have been an easy second.  We got in tight at the three-eighths pole and he doesn’t like it down inside.  When I got him out, he re-broke for me…I’m disappointed we didn’t finish second.  I know Nick is too.”

Florida-bred Ron the Greek, who came off a smashing win in the Sunshine Millions Classic at Gulfstream Park Jan. 19, made a huge run to win a “Dude-less” Big ’Cap last year from well off the pace, was the second choice at 5-2 but was never a factor under Jose Lezcano.

“I got my horse in a position he wanted to be in, and he gave me a good race,” said Florida-based Lezcano.  “The only thing is that Game On Dude is so fast—nothing compares.  We ran hard the whole way, but we couldn’t keep up with him.”

California-bred John Scott, 20-1 on the morning line, was scratched by trainer Carla Gaines earlier in the day.

Santa Anita will offer a nine-race program on Sunday with first post time at 12:30 p.m.