ARCADIA , Calif. (Feb. 28, 2013)—Irish-bred Willyconker displayed a tangible turn of foot when challenged and won Thursday’s $65,000 Wrightwood Purse at Santa Anita by 1 ¾ lengths under Garrett Gomez, getting one mile on turf in 1:33.44.

A winner of the Grade I Frank E. Kilroe Mile (turf) a year ago, the 6-year-old gelding was never a factor when finishing 10th at 22-1 in the Grade II Arcadia Stakes on Feb. 2.

The Wrightwood, a third-condition allowance for older horses with an optional claiming provision of $80,000, attracted a field of seven, including 9-5 favorite Causeithertz, who finished third.

“We asked Garrett to ride him as he pleased, and he’s well known to have done his homework,” said trainer Doug O’Neill’s primary assistant Leandro Mora.  “I’m really happy, because I thought he (Willyconker) was done, that he might quit, but he came back.” 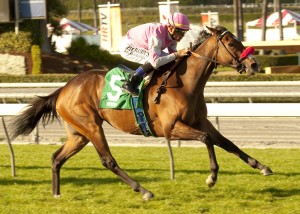 One of two horses entered for the optional claiming price of $80,000, Willyconker was the co-second choice at 7-2 with second place finisher Tigah.

“I think the drop in class today was a big key,” said Gomez.  “When that other horse (Tigah) came to him, he reached down and did what he is supposed to and ran to the wire.”

Causeithertz, ridden by Rafael Bejarano, encountered traffic trouble at the rail approaching the quarter pole and then rallied for third money.  He paid $2.20 to show.