The Hall of Fame trainer saw what some more of his 3-year-olds could do Sunday, when Shakin It Up won the $150,000 San Vicente Stakes by a length to give Baffert his eighth victory in the sprint at Santa Anita.

Baffert’s other two horses, War Academy and 9-5 favorite Belvin, finished fourth and last, respectively, in the six-horse field. His trio made their first starts of the year in front of 11,745.

“I’m so undecided on everything,” Baffert said about future plans for any of them. “They’ll be nominated to everything in the country. Then we’ll jump on a plane.”

Ridden by David Flores, Shakin It Up ran 7 furlongs in 1:22.48, rallying in the stretch to separate himself from five rivals in the near-blanket finish. The brown colt paid $6.40, $3.80 and $2.80. He is co-owned by Mike Pegram, a longtime friend and client of Baffert. 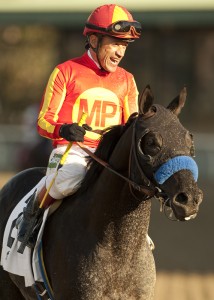 “He was sort of fresh today,” Baffert said. “I didn’t really have him super-cranked up for the race, but we’ve always thought highly of him, so we’ll just find something for him. I don’t know.”

Treasury Bill returned $5 and $3.80, while Caballo Del Cielo was another three-quarters of a length back in third and paid $3.60 to show.

Shakin It Up was the most accomplished of Baffert’s trio, having finished second in his racing debut in October, then winning for the first time three weeks later before finishing third in the Hollywood Prevue Stakes in November.

That race at Betfair Hollywood Park was Shakin It Up’s most recent start and he was ridden by Martin Garcia. Flores, who rode Shakin It Up in his first two starts, reunited on Sunday, while Garcia was aboard War Academy .

“He’s done well with him and I was sort of mad at myself for taking him off,” Baffert said about Flores . “I was trying to help Martin out a little bit, but I put David back on and he gets along with him pretty well.”

Flores won for just the third time this year, and was thrilled to be back on Shakin It Up knowing that he has a possible Kentucky Derby horse.

“It reminds me of the good ol’ days. It brings me back to a time when I was riding these kind of horses,” he said.

Shakin It Up was fifth in the early going before moving up to third, while Belvin set the early pace. Shakin It Up went between horses in the stretch and took the lead near the sixteenth pole before gaining some separation under Flores ‘ urging.

“He put me in the race right away, so I just had to be patient and wait for the pocket to open,” he said. “When I asked him to go, he accelerated, a tremendous acceleration.”

Pegram and Baffert teamed to win the fifth race with Governor Charlie, who like Shakin It Up, was sired by two-time Breeders’ Cup champion Midnight Lute.

Treasury Bill is owned by Gary and Mary West, whose Robert Lewis winner Flashback (trained by Baffert) is one of the top 3-year-olds in the West.

“He was kind of dragging me up there, which I like because he usually gets off the bit the last part and comes running,” jockey Joe Talamo said. “I thought that was a great effort.”

Ron Ellis, who trains Treasury Bill, said the colt would be pointed to the Rebel Stakes at Oaklawn to keep him separated from Flashback, who is likely to stay at Santa Anita.

“I didn’t really think he could compete with these kind of horses going 7 furlongs, so I’m very happy,” Ellis said.

The San Vicente was not part of the “Road to the Kentucky Derby” race series that awards points to the top four finishers of designated races and determines the 20-horse field for the May 4 Derby.

“This should have had at least 10 points on it,” Baffert said. “This was a tough race.”