With Mike Smith aboard, Fed Biz fought back gamely in the San Fernando to deny the Steve Asmussen-trained Tritap, with Corey Nakatani up, by a head, while getting the distance in 1:42.20—which earned him a Beyer Speed figure of 99.

The Kentucky-bred colt by Giant’s Causeway has improved in several areas, according to Smith.

“I really like him when I breezed him before the (Malibu Stakes) on opening day and for some reason he got really hot,” said Smith following the San Fernando win.  “I hadn’t taken two steps inside the gate and he was over, and he threw me out the back (of the starting gate), and he just wasn’t right after that.

Fed Biz  ended up breaking a bit slowly in the Malibu and finished sixth, beaten  6 ¼ lengths.

Sent from the gate in the San Fernando , he led in gate to wire fashion, and responded well to Smith’s commands when it counted.

“Early on, he used to be a little stubborn about switching to his right lead.  Once I got him over there, he’s game, he wouldn’t let somebody by him unless they surprised him.”

It is expected that Smith could employ similar tactics on Saturday, as he’ll be facing three others who ran behind him in the San Fernando , including runner up Tritap.

A Kentucky-bred colt by Tapit, Tritap has been a gem of consistency for Asmussen and will be seeking his first stakes victory in the Strub.  He’ll again be handled by Nakatani, who rode him for the first time in the San Fernando . 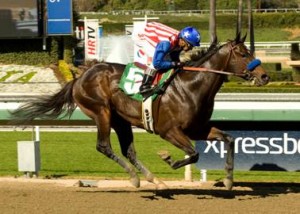 “He ran his butt off,” said Nakatani following the San Fernando , in which he broke from post position nine.  “We had a real good position but he also had to do quite a bit from the (post) position we had…He ran a dynamite race and it was unfortunate that we got beat.”

Owned by Winchell Thoroughbreds LLC, Tritap sat close to Fed Biz in the San Fernando and has ample speed.  Second at the distance in a first-condition allowance at Saratoga on Sept. 2, Tritap has an overall mark of 8-2-4-0, with earnings of $151,936.

In addition to Fed Biz, Baffert will also saddle Guilt Trip, who finished a half length behind Tritap in the San Fernando .

Ridden by Joe Talamo, Guilt Trip made a solid run from off the pace.

“I was tucked in,” said Talamo.  “Looking back, I wish I had just circled the field.  I think if I’d have gone five-wide, I don’t know if he’d have won, but he came flying.  He’s a nice horse.”

Fed Biz and Guilt Trip worked six furlongs in company on Sunday for Baffert, with Guilt Trip getting the best of it, stopping the watch at 1:12 flat.  Fed Biz was timed in 1:12.40 on a wet fast track.

Owned by Gary and Mary West, Guilt Trip is a lightly raced colt by Pulpit who is search of his first stakes win.  He brings a record of 6-2-0-1 and earnings of $117,567 to the Strub.

A winner of the Grade II Pennsylvania Derby at 1 1/8 miles on Sept. 22, Handsome Mike, a Kentucky-bred colt by Scat Daddy, has shown ample speed in virtually all of his races.  The leading money-earner coming into the Strub of $759,780, he has an overall mark of 13-2-1-1.

Fourth in the Pennsylvania Derby, Graham Motion’s Stephanoatsee was a subsequent winner of the 1 1/16 miles Barbaro Stakes on Oct. 20 at Delaware Park .  Third going 1 1/8 miles in the Grade III Discovery Handicap on Nov. 17 at Aqueduct, Stephanoatsee has the look of a deep closer—a style that could be flattered by the abundance of speed signed up for the Strub.

Owned by My Meadowview Farm, Stephanoatsee will be ridden for the first time by Julien Leparoux on Saturday.  With a record of 8-3-2-1, he has earnings of $213,000.

Last year’s Grade II Robert B. Lewis served as a steppingstone to superstardom, as I’ll Have Another parlayed his Lewis win to triumphs in the Santa Anita and Kentucky Derbies and the Preakness Stakes.

Saturday’s Lewis attracted a field of four, including He’s Had Enough, who like I’ll Have Another, is owned by Reddam Racing, Inc., trained by Doug O’Neill and ridden by Mario Gutierrez.

Second, beaten a head by Shanghai Bobby in the Grade I Breeders’ Cup Juvenile on Nov. 3, He’s Had Enough has been idle since running a well-beaten fifth in the Grade I CashCall Futurity on Dec. 15.

A first-out maiden winner going 6 ½ furlongs on Aug. 12 at Del Mar, He’s Had Enough has broken slowly in three out of his five starts and has been devoid of early speed in all of his races.

A Kentucky-bred colt by Tapit, He’s Had Enough would benefit from a lively pace, but that could be problematic, given the short field.  Due primarily to his second-place finish in the Breeders’ Cup, He’s Had Enough sports the biggest Lewis bankroll, with $448,000 in earnings from a record of 5-1-1-0.

Prior to that, the Florida-bred colt by Medaglia d’Oro finished third, from far off the pace, in the Grade I CashCall Futurity on Dec. 15.  A winner of the Grade III Generous Stakes going one mile on turf Nov. 24, Den’s Legacy has shown an ample amount of versatility and has tactical speed, if needed.

With nine starts to his credit, he has more races under his belt than the rest of the Lewis field, combined.  His complete record is 9-2-4-1, with earnings of $281,350.

Baffert will also send out Flashback, who was a flashy first-out maiden winner going seven furlongs on Dec. 8, cruising to a 4 ¼ length win over next-out winner Appealing Tie.

Owned by Gary and Mary West, the Kentucky-bred colt by Tapit has a string of impressive works since his maiden win, including a bullet five furlong drill of 59.40 on Jan. 28—best of 20 at the distance.  Julien Leparoux will again ride Flashback, who may go to the early lead in the Lewis.

Trainer Richard Baltas will send out Little Jerry, who was a first-out maiden winner from well off the pace going 1 1/16 miles on Nov. 18.  After breaking slowly, he was never a factor in his next assignment, the CashCall Futurity, on Dec. 15.  Owned by Jaam Racing Inc. & Riley Racing Stable, Little Jerry will be ridden by Tyler Baze, who was up for the maiden score.

After hopping at the break, the Ron McAnally trainee sat second early and ended up seventh, beaten 5 ¾ lengths, by eventual Horse of the Year Wise Dan in the Grade I Breeders’ Cup (turf) Mile on Nov. 3.  Prior to that, he was a well beaten fifth behind Game On Dude going 1 1/8 miles in the Grade I Awesome Again on Sept. 29, and earned a career best 103 Beyer Speed figure when running fifth, beaten five lengths, by Dullahan in the Grade I Pacific Classic on Aug. 26.

A four-time Group I winner in Argentina , Suggestive Boy was second beaten 1 ¼ lengths in his U.S. debut, the Grade I Shoemaker (turf) Mile on June 30 at Betfair Hollywood Park .

A 5-year-old, Suggestive Boy has five consecutive turf drills on his tab for his return and will be reunited with Joe Talamo, who guided him to victory in the restricted Wickerr Stakes at Del Mar on July 25.

Owned by Pozo de Luna Inc., Suggestive Boy brings a 11-5-2-0 mark and $407,370 in earnings into the Arcadia .  A victory would give Hall of Famer McAnally, 80, his second lifetime win in the prestigious turf fixture.

Speaking of company kept, European wunderkind, Frankel, appears twice in the running lines of Arkansas-bred Strong Suit, who is a multiple Group winner in England and who will be making his U.S. debut in the Arcadia .

Strong Suit finished fourth as the 3-2 favorite in a Group II Stakes at Doncaster , England in his most recent start on Sept. 15.  The 5-year-old by Rahy has shown good speed in a number of turf sprints and is winless from three tries at one mile on turf.

Now in the care of trainer Simon Callaghan, Strong Suit will be ridden in the Arcadia by top English-based jockey Jamie Spencer.  Owned by Qatar Racing Ltd., he brings a record of 15-5-2-2 and earnings of $524,472.

Any hypothetical early pace battle would have to include Jerry Hollendorfer’s speedy Chosen Miracle, who showed the way going a mile and one eighth in the Grade II San Gabriel Stakes on Jan. 13, finishing third, beaten 3 ¼ lengths by multiple stakes-winning Jeranimo.

Second in the Grade III Eddie D Stakes at 6 ½ furlongs down Santa Anita’s hillside turf course on Sept. 28, the 5-year-old Florida-bred by Ghostzapper will attempt a mile for the first time in the Arcadia .

A winner of the Grade II American Handicap at one mile on turf May 26, Wilkinson has just one start since, a close fifth-place finish in the Grade III Daytona Stakes going 6 ½ furlongs on a wet fast main track.

Trained by Jeff Mullins, the 5-year-old Kentucky-bred son of Lemon Drop Kid is 2-1-0-1 at a mile on turf and should benefit stretching out with a race under his belt.  Martin Pedroza will ride for the third consecutive time and it’s expected that Wilkinson will be attentive to the early Arcadia pace.

A winner of last year’s Grade I Frank E. Kilroe Mile (turf), Irish-bred Willyconker has been the beaten favorite in his last two races, both turf allowance affairs at 1 1/16 miles and one mile, respectively.

Trained by Doug O’Neill, 6-year-old gelding Willyconker will get a new rider in Kevin Krigger on Saturday.  A winner of the Kilroe from slightly off the pace under Joel Rosario, Willyconker has also run very well on the lead and has an outstanding 11-5-3-1 mark at one mile on turf.

Like Strong Suit, Irish-bred Vagabond Shoes is a multiple Group Stakes winner in Europe and will be making his U.S. debut in the Arcadia .

A 6-year-old gelding by Beat Hollow, his most recent start resulted in a third-place finish in a Group II Stakes in Germany on Aug. 30.  With a 12-4-1-1 record at one mile on turf, he has been attentive to the pace in most all of his middle distance starts.

Now in the care of trainer John Sadler, Vagabond Shoes is owned by Hronis Racing LLC, and he’ll be ridden by Julien Leparoux.  His overall mark is 20-6-2-3, with earnings of $233,347.

Upstart Klisz, a perfect three for three, comes off a solid allowance win going a mile on grass at Santa Anita on Jan. 5 and rates an upset chance with Mike Smith up.  A 4-year-old Kentucky-bred gelding by Smarty Jones, Klisz is trained by Michael Ann Ewing and is owned by Marczak and Saccone.