ARCADIA , Calif. (Jan. 26, 2013)—Under confident handling from Rafael Bejarano, 4-5 favorite Tiz Flirtatious had her competition measured at the top of the stretch and she powered home to win the $100,000 Valentine Dancer for California-bred fillies and mares, dispatching a field of six rivals by 1 ¾ lengths while getting one mile over a turf course listed as “good” in 1:35.17.

“She was a little rank with me going into the first turn, but she settled down on the backstretch,” said Bejarano.  “She’s very professional and she’s very competitive.  Before the first turn she was rank because we were going so slow, but once she relaxed she picked it up.  She’s a really nice horse to ride.”

Tiz Flirtatious, a 5-year-old mare by Tiz Bud, had been second in her last two starts, the Grade III Robert J. Frankel Stakes on Dec. 30, and the Grade I Matriarch on Nov. 25 at Betfair Hollywood Park .

“They were going slow the first part, so she was tugging a little bit,” said winning trainer Marty Jones.  “When she switches off and relaxes, she’s really got a great kick.  Hopefully we can get back into graded stakes after this.” 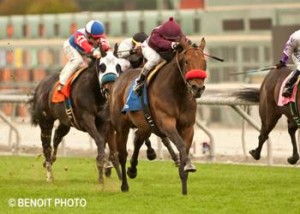 Owned and bred by Pamela Ziebarth, Tiz Flirtatious is out of the Victory Gallop mare Masquerade Belle, who according to Ziebarth, is back in foal to Tiz Bud at Harris Farms in Coalinga.

Longshot Dancingtothestars, off at 12-1 with Mario Gutierrez, pressed the early pace through fractions of 24.31, 48.30, 1:11.92 and 1:23.70, and was clearly second-best, finishing 1 ¼ lengths in front of pacesetter Toomanytomatoes and Kevin Krigger.

Toomanytomatoes, off at 22-1, finished a half-length in front of Secret Cove and Mario Gutierrez and paid $5.60 to show.

Second choice Halo Dolly, off at 5-2 with Joe Talamo, was pinched back at the break and ran sixth, beaten by only four lengths.

It was another 20 ¾ lengths back to Best Present Ever and Martin Pedroza, who had a nightmarish journey.

“My saddle went forward,” said Pedroza.  “I had no control.  I had no control or guidance of my horse.  The saddle was going like I was going to fly over her neck.  I took my feet out of the irons and put them back in and that was my mistake…It was like driving a car from the back seat.”