ARCADIA , Calif. (Jan. 20, 2013)—From Horse of the Year Wise Dan to jockey Ramon Dominguez and trainerDale Romans, a total of 10 Eclipse Award winners competed during the two-day Breeders’ Cup World Championships at Santa Anita in what for many were their final performances of 2012—once again establishing The Great Race Place as America’s most coveted stage en route to racing stardom.

Trained by Charles Lopresti, Wise Dan won the hearts and minds of fans and media the world over with his devastating win in the Grade I, $2 million Breeders’ Cup (turf) Mile on Nov. 3, winning by 1 ½ lengths under John Velasquez while getting the distance in a rapid 1:31.78.

In addition to Horse of the Year Honors, Wise Dan, who is owned by his breeder, Morton Fink, was also voted top Older Male and Male Turf Horse by Eclipse voters—thus becoming the first horse since the legendary John Henry in 1981 to win Eclipse Awards in three different categories.

Santa Anita-based Beholder, Eclipse Award-winning 2-year-old filly, won the Grade I Breeders’ Cup Juvenile Fillies by one length at 1 1/16 miles on Nov. 2, and was an 11-length allowance winner going six furlongs at Santa Anita on Oct. 4, her final prep for the Juvenile Fillies.  Owned by B. Wayne Hughes’ Spendthrift Farm, she is conditioned by Richard Mandella. 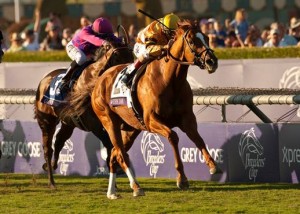 As expected, Southern California-based I’ll Have Another was voted Eclipse Award-winning 3-year-old.  Although he was retired well in advance of the Breeders’ Cup, I’ll Have Another and Mario Gutierrez electrified the racing world with dramatic wins at Santa Anita in both the Grade II Robert B. Lewis Stakes and the Grade I SantaAnita Derby in advance of victories in the Kentucky Derby and Preakness.

I’ll Have Another, who is currently standing at stud in Japan , was owned by J. Paul Reddam and trained byDoug O’Neill.

Although she finished off the board in the Grade I Ladies’ Classic on Nov. 2, Godolphin Racing’s Questing was voted Eclipse Champion 3-year-old filly.  She is trained by Kiaran McLaughlin.

Royal Delta, who was an authoritative 1 ½ length winner of the Ladies’ Classic under Mike Smith, was crowned Eclipse Champion Older Filly or Mare.  Trained by Bill Mott, she is owned by Besilu Stables.

Trinniberg, who took the Grade I Breeders’ Cup Sprint by three quarters of a length under Willie Martinez, was voted Eclipse Champion Sprinter.  He is trained by Shivananda Parbhoo and is owned by his wife, Sherry.

French-bred Zagora, who won the Grade I Breeders’ Cup Filly & Mare Turf at 1 ¼ miles by three quarters of a length, was votedEclipse Champion Female Turf Horse.  Ridden by Javier Castellano, she is trained by Chad Brown and owned by Martin Schwartz.

Romans, who hosted a well-attended Meet and Greet event at his Santa Anita barn prior to the Breeders’ Cup, won the Grade I, $3 million Breeders’ Cup Turf with Little Mike and earned his first Eclipse Award as the nation’s Champion Trainer.

Ramon Dominguez, who rode Little Mike to his Breeders’ Cup victory and who was selected by a vote of his peers as winner of the2012 Santa Anita George Woolf Memorial Jockey Award, was easily voted Eclipse Champion Jockey.

For the seventh time, Santa Anita Park will again host the two-day Breeders’ Cup World Championships this fall on Nov. 1 & 2.