Baffert has entered a pair; multiple stakes winner Drill and veteran Apriority, a 6-year-old who recently arrived from South Florida, while Miller sends out his stable’s meal ticket, the ultra consistent Comma to the Top, a 5-year-old gelding who comes off a sharp win in the Grade III Daytona Stakes going 6 ½ furlongs on Dec. 29.

O’Neill will be represented by the hard-hitting Private Zone, who earned a best last-out Beyer Speed figure of 103 when second, beaten three-quarters of a length, in the Malibu.  And Asmussen will try to spring a surprise with Justin Phillip, who comes off a good effort in the Breeders’ Cup Sprint on Nov. 3.

Drill, who was supplemented to the Palos Verdes for $3,000 by his owners, comes off a respectable fourth in the opening day Grade I Malibu Stakes going seven furlongs.  In the Malibu , Drill was away slowly at 10-1 and finished full of run, 3 ¾ lengths behind winner Jimmy Creed.

Drill had been idle since winning the Grade III, seven furlong Lazarro Barrera Stakes on May 12, and could well improve with a recent race under his belt.  The 4-year-old colt by Lawyer Ron has solid sprint credentials, as he has two additional graded stakes wins to his credit at seven furlongs, the Grade I Del Mar Futurity and the Grade II San Vicente at Santa Anita last February.

Owned by Mike Pegram, Karl Watson or John Weitman, Drill will again be ridden by Martin Garcia who was aboard on opening day and who has guided him to all three of his stakes victories.  The Kentucky-bred has a record of 12-4-2-0, with earnings of $437,710. 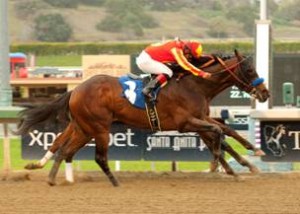 A $22,000 2-year-old in training purchase in April, 2010, Comma to the Top became a millionaire in winning the Daytona, which was shifted from the turf to a wet-fast main track.  Like Drill, he was a Grade I winner at two, as he took the CashCall Futurity at 1 1/16 miles and then went on the following spring to run second, beaten a head in the Grade I Santa Anita Derby.

“Words can’t describe a horse like this,” said Miller following the Daytona win.  “He’s gone through so much, but he wants to beat you.  He’s just an iron horse.  He’s a $22,000 gelding and you wish you had a barnful of them.  He makes training easy.  He tries every time.  He just wants to please you.”

Owned by Gary Barber, Roger Birnbaum and Kevin Tsujihara, Comma to the Top has more than “pleased” his connections, with an overall mark of 25-11-2-1 and earnings of $1,027,696.  Edwin Maldonado will ride the Florida-bred son of Bwana Charlie back.

Private Zone, who made the early Malibu running, carving out splits of 22.60, 44.60 and 1:08.20, fought back gamely but couldn’t hold off Jimmy Creed inside the sixteenth pole.  It’s worth noting that Private Zone was back on terms with the winner shortly after the wire and stayed in front on the gallop-out around the Club House turn.  He has the advantage of drawing outside of both Drill and Comma to the Top and Martin Pedroza, who has guided him to three consecutive second-place-finishes, would appear to have the luxury of being the controlling speed.

A 4-year-old Canadian-bred by Macho Uno, Private Zone began his career in Panama and will seek his first stateside win on Saturday.  Owned by Good Friends Stable, Private Zone has earnings of $186,580, from an overall mark of 15-3-5-1.

Trainer Steve Asmussen will be represented by Justin Phillip, who although he was 30-1, closed much ground to be fifth, beaten four lengths in the Grade I Breeders’ Cup Sprint on Nov. 3.

A Grade II stakes winner going seven furlongs at age three, 5-year-old Justin Phillip has a 9-2-2-1 mark at six furlongs and will break from the far outside on Saturday.  Owned by Zayat Stables, LLC, he has earnings of $577,162 and will be ridden back by Rafael Bejarano.

Consistent Lady Ten, a winner of the Grade III Autumn Miss Stakes on Oct. 27, and a winner of four of her last six starts, all of them at two turns on grass, and A Jealous Woman, who comes off a solid second in the Grade II Goldikova Stakes on Nov. 4, would appear to head Saturday’s $75,000 Megahertz Stakes for older fillies and mares at one mile on turf.

In the one-mile Autumn Miss, Lady Ten was attentive to the pace as a the 2-1 favorite and prevailed by a neck, getting the distance in 1:34.80.  A winner of the one-mile Sandy Blue at Del Mar on Aug. 17, she was second, beaten one-length, by A Jealous Woman in the Swingtime Stakes at Santa Anita on Oct. 6.

Blessed with good tactical speed, Lady Ten has been trouble-free in all of her recent races and has a record of 6-2-3-1 at one mile.  Her overall mark is 11-4-5-2, with earnings of $246,244.  Bred in Kentucky by her owner, Mercedes Stables, LLC, the 4-year-old daughter of Rock Hard Ten is conditioned by Bob Baffert and will again be ridden by Rafael Bejarano.

Idle since the Goldikova, A Jealous Woman’s best races have been when she can make an uncontested lead as she has done in her last two victories—both of them with veteran Brice Blanc aboard.  A 7-year-old California-bred mare by Muqtarib, A Jealous Woman has been ridden by Blanc in eight of her last nine starts, of which she has won three.  She has career earnings of $383,256 from an overall record of 18-7-3-3.

The Megahertz, which attracted a field of eight, will also showcase the highly regarded Irish-bred Byrony, who has been favored in five of her seven stateside starts for trainer John Sadler.

A well-beaten sixth in the Goldikova, Byrony came back to run a solid third on Nov. 22 as the 6-5 favorite in a classified allowance going 1 1/16 miles on turf at Betfair Hollywood Park.

She’ll get a new rider in Garrett Gomez on Saturday and the 5-year-old mare could be taken off the early pace.  Owned by the Batchelor Family Trust or J. Partridge, Byrony has earnings of $136,410 from an overall mark of 25-7-1-5.

French-bred Camelia Rose, who comes off a non-threatening sixth-place finish in the Grade III Robert J. Frank el Stakes at 1 1/8 miles on Dec. 30, will cut back in distance to a mile for the first time since April of 2011 at Longchamp.  A winner on that occasion, she’s also got a second-place finish from just two tries at eight furlongs.

Brazilian-bred In the Stars would have to be considered an up-and-comer in the Megahertz, as she is one neck shy of winning three of her four stateside starts for trainer Richard Mandella.  She stormed home to win by a half-length in her most recent effort, a second condition allowance going one mile on turf on Dec. 14.