Wellington, FL – January 15, 2013 – If week one serves as any indicator of how the rest of the FTI Consulting Winter Equestrian Festival season will pan out, it’s going to be an extremely successful one for New Hope LLC. New Hope owners Christopher Payne and David Belford come to Wellington, FL, from Cincinnati, OH, bringing with them an impressive line up of top horses. With only five days of showing complete, they have already captured wins across the board, and are looking forward to the remainder of the season.

Elizabeth Morgan started things off strong for New Hope Farm, riding away with the championship in the Adult Amateur 18-35 Hunters aboard As Always. Morgan and As Always, a 12-year-old bay Westphalian stallion, swept the division, winning all four over fences classes as well as the under saddle. The dynamic pair has been training together at New Hope Farm for the past four years.

“Major [As Always] is really funny,” Morgan laughed. “Although he is a stallion, he definitely doesn’t act like one at all. I bought him at the 2009 Capital Challenge, and have gotten to know him so well. He is definitely a lover, you can go into his stall and he will lick your hand, he is so sweet and gentle.” 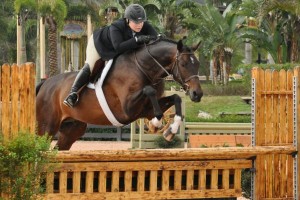 Even though Morgan has not shown since the 2012 Capital Challenge, her bond with As Always has been nothing but resilient. “He is very smooth, very straight forward, if you get him in gear everything will flow from there. We had never swept an entire division before; it was an amazing feeling. Chris and Dave have really helped me with my riding, and they are the reason why I have gotten this far. They have really made the journey in my riding career easy and enjoyable,” Morgan concluded.

Right on Time, owned by Elizabeth Ott, and Say When, owned by Danielle Baran, both joined As Always on the list of championship winners this week, claiming the top honors in the Low Adult Hunters and the 3’3″ Pre-Green Hunters respectively. Christopher Payne piloted both horses to their division wins, picking up several first place awards on both mounts along the way. Ott also showed Right on Time in the Low Adult Hunters, placing high in several of her classes, including both a first and a second over fences.

David Belford and Christopher Payne have trained some of the country’s top show hunters and are continuously adding numerous accolades to their already impressive record. The team has consistently earned championships at the nations top horse show, and their inspiring program has helped transform horses, as well as develop some of the sport’s top riders and trainers.