ARCADIA , Calif. (Jan. 13, 2013)—With surprising ease, seven-year-old Jeranimo steamed home under a hand ride from Rafael Bejarano to win Sunday’s Grade II, $150,000 San Gabriel Stakes at Santa Anita by 2 ¾ lengths, getting a mile and one eighth on turf in a rapid 1:46.50, leaving his connections optimistic about trying longer distances throughout the year.

“We have always had hopes of running in the Arlington Million,” said winning trainer Mike Pender.  “We think this horse can go a mile and a quarter if he gets his trip and gets the right pace in front of him.  As he gets older we are going to try and turn him into a marathoner.  He might surprise a few people.”

Jeranimo, who made the early lead and was second in last year’s San Gabriel , came off an even effort in the Grade II, 1 1/16 miles Citation Handicap at Betfair Hollywood Park in which he ran fourth, beaten four lengths at odds of 3-1.

On Sunday, he was last early in the seven-horse field and was into contention readily around the far turn while caught three-wide turning for home.

“I had a ton of horse from the beginning all the way to the end,” said Bejarano.  “I never had to use my stick.  He just galloped the whole race.  Coming into the stretch I asked a little bit and he responded with a big kick.  The way he ran today was impressive.”

Owner B.J. Wright, as his is custom, was effusive in his praise of Pender, who played quarterback for Wright on a youth football team more than 30 years ago.

“What a training job!” said Wright.  “I mean, this horse is seven years old and he’s getting better.” 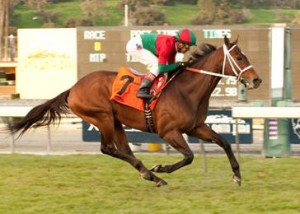 Off as the third choice at 5-2, Chosen Miracle got pressure throughout from 42-1 longshot Fast Track and Martin Garcia, and tired the final eighth, finishing third, a half-length behind 20-1 shot Temple’s Door and Tyler Baze.

“I don’t know if I would have won, but I would have run a good second if that horse (last-place finisher Fast Track) wouldn’t have pressed me.  It just went too quick up front.  My horse really ran hard though.”

Chosen Miracle finished a length in front of Juniper Pass and Julien Leparoux, returning $3.20 to show.

Slim Shadey, ridden by Garrett Gomez, was the 3-2 favorite and appeared to be in perfect position to menace mid-way around the far turn but flattened out badly through the drive, finishing a well beaten sixth.

In her second start for trainer Jerry Hollendorfer, 5-year-old Snowfall showed significant improvement stretching out to a mile and a sixteenth, as she demolished six rivals in taking the $75,000 Paseana Handicap under Tyler Baze, winning by 3 ¼ lengths and getting the distance in 1:42.66.

“We were a little concerned about running her back quickly, but she responded very well out of her race, so we decided to try her going long and I’m glad we did,” said Hollendorfer.

Snow Fall was all business in the Paseana, as she prompted the pace from post position four to the Club House turn and kept the pressure on 8-5 favorite Distracting and Rafael Bejarano through fractions of 23.80, 47.61 and 1:11.76.  Snow Fall got the mile in 1:36.26 and was powerful the final sixteenth.

“I haven’t had that feeling from a horse in a long time,” said Baze.  “I had so much horse under me, it’s just a great feeling to have from such a good horse like that.  Jerry gave me the opportunity, so I was going to take advantage of it.”

A minor stakes winner in New York at age three, Snow Fall was well beaten two starts back in the Grade I, one-mile turf Fast Lady at Keeneland on Oct. 6.

Distracting, one two Bob Baffert entrants, finished 3 ¾ lengths in front of 20-1 shot Curvy Cat and Corey Nakatani and had a clean trip as the favorite.

Charm the Maker, trained by Ron McAnally and ridden by Garrett Gomez, broke poorly and never threatened as the 5-2 second choice.

“Dan (assistant trainer, Landers) and Ron have been working with her at the gate and she walked in there and was good for a second,” said Gomez.  “Then she got a little silly, and then I reached up to grab her ear and it (blanked) her off.  As soon as she left there, she hopped and she was never happy.”

There was one winning ticket on-track, purchased in the Infield for just $64.00.

Santa Anita will begin a special five-day racing week on Thursday, with first post time on both Thursday and Friday at 1 p.m.  First post time on Saturday, Sunday and Monday (Martin Luther King, Jr. Day) will be at 12:30 p.m.