1. Bownds gets comeback started in Odessa

ODESSA, Texas – Chandler Bownds had a big grin on his face when he completed his ride on the Andrews Rodeo’s bull Jaw Bender, and it got even bigger when announcer Randy Corley called out that it had earned a score of 89 points.

It proved enough to get Bownds the win at the SandHills Stock Show & Rodeo, but that was almost beside the point after the injury-plagued season he suffered through a year ago. The main thing was that he was riding well and pain-free.

No, the main thing was the hope this ride imbued in him.

“What a great confidence boost,” Bownds said. “I know I’m not all the way back to riding shape yet – I’m probably 80-90 percent there – but it’s coming and to be able to have a ride like that really means a lot.”

A year ago, Bownds went from being the Resistol PRCA Bull Riding Rookie of the Year and a Wrangler National Finals Rodeo qualifier, to being a surgical patient and a rehab warrior.

He suffered a groin injury at the Crockett (Texas) Lions Club PRCA Rodeo last spring, took a month off and then aggravated the injury at the Sisters (Ore.) Rodeo, in June. 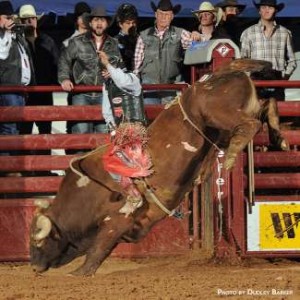 After a consultation with Dr. Tandy Freeman, Bownds underwent surgery in Philadelphia on June 28, where doctors reattached his groin muscle to his pelvis. He was sidelined for another two months.

“When I did come back in late August I was still pretty weak,” Bownds said. “I worked out a lot, including underwater therapy, but it’s a long process. You think you are in shape, but you aren’t really in riding shape. That’s going to take a while.”

It was Wright’s third consecutive win at Odessa and fourth in the last six years. The first two wins there, in 2008 and 2010, got Wright started toward world championships and this one lifted him into first place in the 2013 standings, $1,451 ahead of his brother Spencer in second place.

GREAT FALLS, Mont. – It doesn’t appear that Beau Hill is prepared to surrender his status as Montana’s greatest bull rider any time soon.

Hill, who turns 34 next month, was utterly dominating – again – in winning the Jan. 11-13 Ram Montana Circuit Finals Rodeo and along the way equaled Dave Wagner’s circuit record with a fifth year-end championship.

How dominating are we talking? For the second year in a row, Hill was the only bull rider to have qualified rides in all three rounds and he got better day by day at the $147,413 rodeo.

Hill, of West Glacier, Mont., tied for second place behind Luke Gee in the first round with a 79-point ride, then won the second round with an 85-pointer and closed out with a 92-point win on Kesler Rodeo’s Whiskey Jack to finish with 256 points.

“I won on that same bull in Kalispell (Mont., last summer),” Hill told the Daily Inter Lake of Kalispell. “I got a 91 (there) and a 92 today. He was the bull of the year for our circuit. You always want to draw one you can win on and he was the best one here. That gives you a chance to prove yourself … show that you’re one of the best. 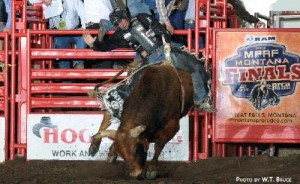 “He bucks super hard. If you mess up for a split second, he’ll throw you off. He’s also got a little fear factor about him. He’ll come after you, try to hook you. He has a little attitude.”

The $6,742 Hill banked over the weekend lifted his season total to $13,003 and allowed him to wipe out a $5,602 deficit in the season standings and edge Parking Breding by $303 to claim that fifth year-end title.

“It was a really good weekend,” Hill said. “I couldn’t ask for much better. It never gets old (being a circuit champion). The older I get the more I appreciate everything. You never know when it will be the last one. It’s year-to-year for now.”

Apart from Hill, Erickson was the only other repeat champion at the RMCFR.

3. Nastri, Rimes going back to the RNCFR

HARRISBURG, Pa. – Carmine Nastri has been to so many circuit finals – both at the regional and national level – that he’s lost count. The 52-year-old can add another notch to his belt after taking the team roping average title with partner Lewis Rimes Jr. at the Jan. 10-12 Ram First Frontier Circuit Finals Rodeo.

Nastri – who has roped at the RNCFR with Rimes Jr. at both Pocatello, Idaho, and Oklahoma City – missed the party last year and is eager to go back.

“I’m thrilled to be going back; we came here knowing we needed to win the average and we were able to pull it off,” said the Ballston, N.Y., native. “The RNCFR is as good as it gets for cowboys like us because we don’t rodeo enough to get to Vegas (for the Wrangler National Finals Rodeo).”

The win on Jan. 12 at the Farm Show didn’t come without some good fortune. Going into the final round, Nastri and Rimes Jr. needed to have a fast time and they also needed some help.

The pair had a time of 6.6 seconds, which was good for second in the round. They then watched as Frankie Fernandez and Brice Stafford had trouble with their steer, earning a time of 10.8, allowing Nastri and Rimes Jr. to win the average by 0.9 seconds. 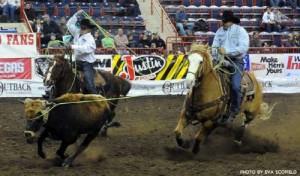 “We had a steer that was a bit tricky, but we were able to handle him and we lucked out when Frankie and Brice had problems,” Nastri said. “You always feel the pressure at circuit finals, but I think we had practiced enough to make good runs.”

Nastri was the all-around champion at the RNCFR in 2003, and showed why on Saturday. On top of winning the team roping average, he also came in second in the tie-down roping average.

“I was really hoping to be able to go back to Oklahoma City for both events, but I just missed it,” Nastri said. “But coming into this weekend, the goal was to win the team roping average, so I’m very happy.”

Sankey Rodeo Company’s Turtle Dove is being retired to the family ranch in Joliet, Mont., after two decades as one of the sport’s top saddle bronc horses. Turtle Dove was selected six times to compete at the Wrangler National Finals Rodeo and was the Montana Circuit’s Horse of the Year in 2010. “Turtle Dove is a horse that definitely had everyone’s respect,” ProRodeo Hall of Fame inductee Dan Mortensen told the Billings Gazette. “He was an ideal horse for the eliminator pen at the NFR because he was hard to ride and bucked every single time.” … Wyoming bull rider Seth Glause, who finished second in the Wrangler NFR average standings and earned more than $98,000 in Vegas, paid a steep price for his December heroics. He suffered a broken nose, a dislocated left shoulder and torn knee cartilage during the 10 days in Vegas. The worst injury was the shoulder, which required surgery on Jan. 9 and will sideline him for four months … Bareback rider Steven Peebles had hip surgery shortly after completing his labors at the Wrangler NFR and is expected to return to action by April … Six-time Wrangler NFR qualifier Chris Harris fractured his left hip while competing in the bareback riding at the Ram Texas Circuit Finals Rodeo earlier this month in Waco and is out indefinitely … Oscar “Butch” Bode, a PRCA Gold Card member who qualified for the 1976 National Finals Rodeo as a tie-down roper – one of only six lefthanders ever to do so –  died Jan. 6 in San Antonio, Texas. He was 60. Memorial gifts may be made to Joe Beaver Junior Superstars Roping, 1329B University Ave., Huntsville, TX 77340 … Cutoff date to qualify for the Oct. 6-12 All American ProRodeo Finals in Waco, Texas, will be Sept. 9. Any All American rodeo ending on or prior to that date will count for this season … The contract to stage the Ram Montana Circuit Finals Rodeo at the Cascade County-owned ExpoPark in Great Falls was extended two years through 2015, it was announced by Circuit President Jim Croff during last week’s 34th annual edition of the event … A combination of state, county and city funding would provide $200,000 for the  design of an indoor arena at the Santa Fe (N.M.) Rodeo Grounds, according to a report in the Santa Fe New Mexican. The city is currently on track to approve a bill introduced by Mayor David Coss that would give $100,000 to the project. A precursor to the measure was approved 13 months ago, but that money was to be given only if Rodeo Property Inc., the owner of the property and a subsidiary of Rodeo de Santa Fe, was able to match the $100,000. The group secured funding from the Legislature for $81,000, and another $19,000 from the county, according to Rodeo de Santa Fe’s lobbyist, Pilar Faulkner … Former University of Southern Mississippi baseball player Mickey Harrington, who was a member of the Philadelphia Phillies in 1963, has been selected to serve as the grand marshal of the Feb. 15-16 Southern Miss Coca-Cola Classic Rodeo in his hometown of Hattiesburg. Harrington, 78, returned to USM after his playing days were over and worked there for 28 years as an assistant basketball coach and then as manager of the school’s Equestrian Center … Calgary’s beloved radio broadcaster Arnie Jackson, who just covered his 40th Wrangler NFR in December, has been nominated for the Alberta Sports Hall of Fame. 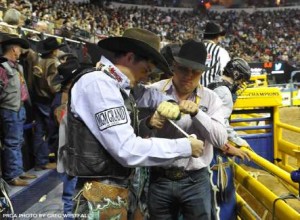 “They don’t pay them enough. I was a little dazed from hitting the ground and the bull grazed (my helmet with his horn) a little and the next thing I saw was (bullfighter) Andy Burelle jumping between us.”

– Bull rider Shawn Hogg, a 2010 Wrangler NFR qualifier, after a scary moment at his hometown rodeo in Odessa, Texas.

*2013 Barrel Racing (through Jan. 14, 2013)
Barrel racing standings, provided by the Women’s Professional Rodeo Association (WPRA), are unofficial, subject to audit and may change. Unofficial WPRA Standings are published by the PRCA as a courtesy. The PRCA is not responsible for the verification or updating of WPRA standings.