ARCADIA , Calif. (Jan. 12, 2013)—Color the comeback of Hall of Fame jockey Gary Stevens complete.  A winner of three Kentucky Derbies and eight Breeders’ Cup races, Stevens emerged from a seven-year hiatus to win Saturday’s first race at Santa Anita aboard the Tom Proctor-conditioned filly, Branding, winning from off the pace by 2 ½ lengths while covering seven furlongs in 1:23.94.

“You can consider me a full-time rider,” said the Caldwell , Idaho native who has been doubling as an analyst on HRTV and will turn 50 on March 6.  “They were getting with it the first quarter of a mile and I thought they might come back to me.  My filly was traveling real well around the turn.  She didn’t really accelerate coming into the stretch but they stopped pretty good.

“I worked out quite a few horses this morning and the track, because of the wind that we had and the real dry conditions, was perfect for snow, but not exactly a racetrack.  It was a little on the cuppy side and tiring.”

Branding, a 3-year-old Kentucky-bred filly by Street Sense, was Stevens’ third mount in a comeback that began at Santa Anita on Jan. 6.  Owned by Leonard Lavin’s Glen Hill Farm, Branding had been idle since her debut on June 28 at Betfair Hollywood Park, a race in which she broke slowly and was beaten 15 ¾ lengths by eventual multiple stakes winning filly Executive Privilege. 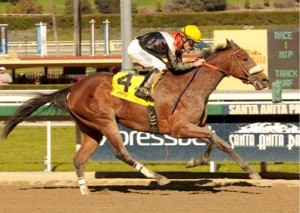 As 9-5 favorite Tizmetizyou and 14-1 longshot Rhinestone Diva, ridden by Jose Valdivia and Julien Leparoux respectively, battled it out through fractions of 22.47 and 45.55, Stevens allowed his filly to gather herself and by the time the field reached the far turn, it was apparent that Branding was on the move and would make her presence felt.

Tizmetizyou stopped the six furlong timer in 1:10.72, but the result was a fait accompli at that point as Stevens and Branding sailed by approaching the sixteenth pole to win clear.

With Saturday’s win, Stevens now has 4,889 in a remarkable career that has also included a record nine Santa Anita Derby wins, two wins in the Preakness, three Belmonts, and at the time of his retirement in November, 2005, $221,212,704 in purse money-won.

Stevens is named to ride four horses on Sunday at Santa Anita, including Tale of a Champion, who is scheduled to run in the Grade II, $150,000 San Gabriel Stakes for older horses at 1 1/8 miles on turf.  The San Gabriel has been carded as the eighth on a nine-race card and Tale of a Champion is 8-1 on the morning line.