ARCADIA , Calif. (Jan. 9, 2013)—Battle Force, a sharp second in the Grade II Sir Beaufort Stakes going one mile on turf at Santa Anita on Dec. 26, will try to transfer his sharp recent form to the main track on Saturday as he takes on nine other four-year-olds in the Grade II, $150,000 San Fernando Stakes at 1 1/16 miles, the middle leg in Santa Anita’s prestigious Strub series.

Trained by John Shirreffs, Battle Force sat mid-pack in the opening day Sir Beaufort but missed by a half-length while rallying stoutly through the lane.  Ridden by Mike Smith in his previous three starts, he’ll be handled for the first time on Saturday by Garrett Gomez.

His lone non-turf start came this past Nov. 17, when he made his first start in 50 weeks running second, beaten a half-length at 2-1 on Cushion Track.  With Gomez aloft, it is expected that Battle Force will be allowed to settle well off the San Fernando pace and come with a big stretch rally.

Handsome Mike, with $756,780 in earnings, is by far the biggest money-winner in the San Fernando field and is also one of the biggest question marks, as he comes off two races; the Breeders’ Cup Classic on Nov. 3, and the Grade I Hollywood Derby (turf) on Nov. 25, in which he was beaten by a combined 30 ¼ lengths.

Trained by Doug O’Neill, owned by Reddam Racing LLC, and ridden by Mario Gutierrez, the classic-winning connections are well-familiar with racing’s biggest stages.  Although he was attentive to the early pace in his last two starts “Mike” never seriously threatened in either.  O’Neill, who took blinkers off for the Hollywood Derby, will put them back on the Kentucky-bred son of Scat Daddy on Saturday.

A winner of the Grade II Pennsylvania Derby on Sept. 22, Handsome Mike’s overall record stands at 12-2-1-1.

Bob Baffert will be amply represented in the San Fernando , as he’ll send out a total of four horses; Mile High Magic, Guilt Trip, Sky Kingdom and Fed Biz. 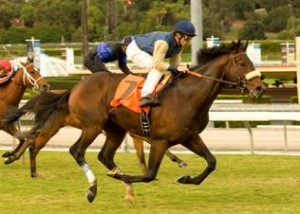 Fed Biz, regarded by many a year ago as perhaps Baffert’s top Kentucky Derby prospect, will be ridden for the second time in a row by Smith, who guided him to a non-threatening sixth-place finish in the opening day Grade I Malibu at seven furlongs.  Off at 11-1 in the Malibu , Fed Biz, at 5-1, was a well-beaten eighth in his previous start, the Grade I Breeders’ Cup Dirt Mile, on Nov. 3.

Fed Biz, owned by Kaleem Shah, earned a San Fernando-best 103 Beyer Speed figure when winning the one-mile El Cajon Stakes on Polytrack at Del Mar Aug. 31.  That victory was earned in gate to wire fashion and it is expected Smith will employ similar tactics Saturday.

Although he’s taking blinkers off for the San Fernando , Mike Pegram’s homebred Mile High Magic could compromise the chances of anyone committed to a fast early pace.  The gelded son of Roman Ruler disappointed as the 9-5 favorite in the seven furlong Damascus Stakes on Nov. 3 and will be trying two turns for the first time on Saturday.

Guilt Trip, who ran a creditable fifth in his Southern California debut, beaten 4 ½ lengths in the Malibu , has scorched the track since and appears primed for a much-improved effort.  In his most recent breeze on Jan. 5, the Kentucky-bred colt by Pulpit drilled five furlongs in 59 flat, best of 103 at the distance.

A two-time winner at one-mile, Guilt Trip will be ridden for the first time by Joe Talamo and should be attentive to the early pace.  Owned by Gary and Mary West, he has earnings of $99,567 from a mark of 5-2-0-0.

Sky Kingdom would appear to be in need of a race, as he’s been idle since running sixth behind eventual Kentucky Derby and Preakness Stakes winner I’ll Have Another in the Grade II Robert B. Lewis Stakes on Feb. 4.  Owned by Westrock Stables LLC, he’ll be ridden for the first time by Edwin Maldonado.  A son of Empire Maker, Sky Kingdom has earnings of $129,930 from a record of 6-2-0-0.

Distance should be no problem for the Steve Asmussen-trained Tritap, who comes off a first-condition allowance score going 1 3/16 miles at Churchill Downs on Nov. 17.  A maiden winner at Saragota going seven furlongs on Aug. 4, the Kentucky-bred colt by Tapit has demonstrated good tactical speed.

Owned by Winchell Thoroughbreds LLC, Tritap has a record of 7-2-3-0 and earnings of $121,936.  Corey Nakatani will ride for the first time.

A two-time Group I winner in Peru, Kentucky-bred Fly Lexis Fly closed much ground when third, beaten 3 ½ lengths by older horses in a classified allowance going     1 1/16 miles on Dec. 1 at Betfair Hollywood.  Trainer Neil Drysdale adds blinkers for the first time and Rafael Bejarano sticks with the son of Badge of Silver.

Darley Stables’ homebred Regulas has two wins routing, including an allowance score at 1 1/16 miles on Sept. 28 at Santa Anita.  The speedy son of Distorted Humor was then attentive to the early pace in the same classified allowance that Fly Lexis Fly exits, and was sixth, beaten 13 ¾ lengths.  Trained by Eoin Harty, he’ll again be ridden by Aaron Gryder.  Regulas has banked $83,050 from a record of 6-2-1-0.

Jerry Hollendorfer will send out the lone California-bred on Saturday, as Tribal Jewel, a gelding by Tribal Jewel, will try to parlay a first-condition allowance win going one mile on opening day to victory in the Grade II San Fernando.  Tribal Jewel earned a 96 Beyer figure for his wet fast score and could be winging early under new rider Julien Leparoux.