LEXINGTON, KY (Jan. 4, 2013) – Keeneland kicks off the New Year with its January Horses of All Ages Sale, which begins Monday and is highlighted by the complete dispersal of Issam Fares’ Fares Farm.

Featured among the 80-horse Fares Farm consignment are Canadian champion Embur’s Song, in foal to Giant’s Causeway; Deputy Saint, a half-sister to two-time Horse of the Year Curlin, in foal to Lemon Drop Kid; and a yearling half-sister to Curlin by Distorted Humor. Lane’s End Farm will act as agent for the dispersal.

The January Sale, which runs through Friday, January 11, is acknowledged as a strong market for top-quality racing and broodmare prospects, and ‘short’ yearlings (weanlings who officially turned a year old on January 1). 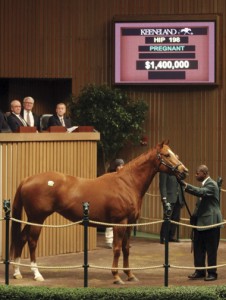 The interactive January Sale catalog is available online at Keeneland.com and via the Equineline Sales Catalog app for the iPad, which can be downloaded free from the App Store on iPad or at iTunes.

Keeneland will provide a live video stream of the entire January Sale at Keeneland.com, coupled with updates on Facebook and Twitter at #keejan.