Here’s the place to stock up on rubber tom-toms, child sixe feathered war bonnets, and deerskin moccasins in styles that haven’t changed since Lucy and Desi traveled West with the Merzes.

It is far off the main road halfway between Albuquerque and Santa Fe; you will know you have arrived when you spot the rusted hull of a Frazer automobile in front of a faded sign announcing, “This is it: most interesting spot in the old west. As featured in life, New Mexico, look magazines and newspapers all over U.S.” The cavernous, wood-floored interior is a wonderland of kitsch and collectibles, including a trio of magnificent old rugs from Navajo Chee Dodge, the first tribal chairman. The rugs cost $45,000, but for those on a budget there are bolo ties for men at $3.95 each (“Popular, Neat, Comfortable”), spears with bendable points at reasonable prices, and beaded belts “for the small fry” that look straight out of Hoppy’s era. Many things for sale are marked by signs that appear not to have changed in decades. “Give you tooties a real break,” a placard above the moccasins advises customer, “Greer Garson says: MMMMmmmm, butter soft and yummy! And Soooo comfortable.”

“Trader Fred” Thompson , a former insurance man from Rochester, New York, has operated the Trading Post, which is on Santo Domingo land and subject to tribal law, since 1951. He is now in his eighties and going strong, and asks most guest to sign in at the register at the front of the store. It is the since of four bug city phone directories, and contains the names of people from every country on earth. 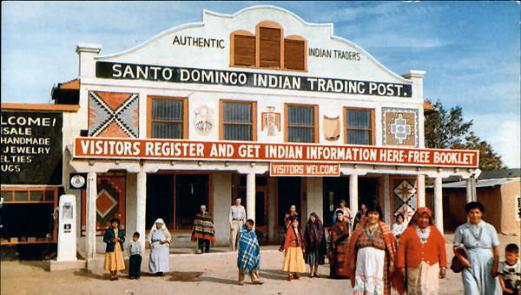