Old Tucson consist of 140 buildings originally constructed in 1939 as a set for the movie Arizona, which took place in 1865 and featured some on thousand modern Tucsonians in roles as extras, playing their ancestors.

Many classic Westerns were subsequently made here, including Anthony Mann’s Winchester ’73 (1950) starring Jimmy Stewart and Howard Hawks’s Rio Bravo (1959), starring John Wayne, Dean Martin, and Ricky Nelson.  Today’s visitors are treated to daily mock gun battles in the street featuring a burro-powered wagon to haul away the actors playing dead bodies. Also featured are stage coach rides for the whole family, live music, a petting zoo, an old0time saloon, a Wizard of the West Illusion show (Lillie Langtry’s garter is made to disappear), and –the drawing card that has proven to be one of the most alluring of all the Western-themed spectacles on the road- tours of the sets and soundstage where exciting cowboy movies and TV shows are still sometimes made. 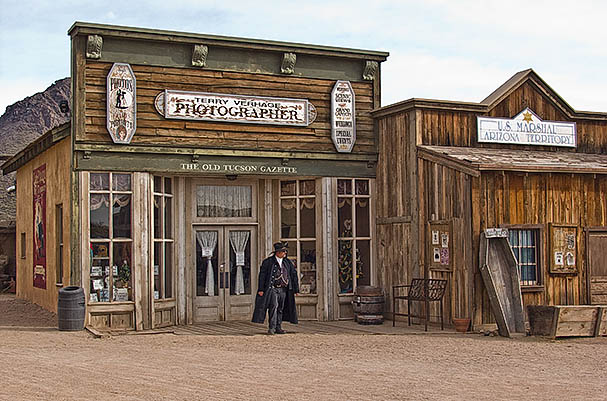