Dutch O-course designer Johan Jacobs had laid out a nice but difficult enough course in the tight Olympia arena, including a bridge and two marathon type obstacles with five gates each. Jacobs had adjusted his course to the size of the arena, which resulted in a fluent, speedy and safe course, very much appreciated by the competitors. The Grand Hall at Olympia was packed with enthusiastic spectators who were treated to a spectacular show by the seven competitors.

Inaugural competition
After successfully organising a test event in 2011 with a quartet of four-in-hand drivers, the Organising Committee of the London Olympia Horse Show had plenty of support for an official FEI World Cup™ Driving competition this year. The OC made a lot of effort to accommodate the seven competitors and their horses and made sure that the public, more used to seeing Jumping and Dressage here, was well informed too. “Our spectators don’t know much about driving, but once they’ve seen the Extreme Driving class, they’ll be hooked on driving forever,” Event Director Simon Brooks Ward said. And, judging by the enthusiasm of the crowd, he’s right!

Pushing on
Boyd Exell was last to go in the FEI World Cup™ Driving competition and had monitored the scores of his fellow competitors closely. Boyd had his tactics well planned and his team of horses were ready to put down another excellent performance. Boyd could afford to drive a bit slower and have one ball down, but his horses felt good and he decided to push them on for a brilliantly driven first round. Both Theo Timmerman and Koos de Ronde tried really hard to close the gap, but they both had knockdowns, which gave Boyd even more advantage in the Winning Round. The four times FEI World Cup™ Driving Champion had two unusual knockdowns, but it wasn’t enough to deny him victory in front of the very enthusiastic home crowd.

Preserving the team
Boyd Exell was not planning to use his top horse Bill again until the Final in Bordeaux, but with two very competitive shows, Boyd made the decision to use Bill again at Budapest and Olympia. Boyd did opt not to use Spitfire though, in order to preserve his team for the ultimate performance at the Final when he will be aiming for an incredible fifth title. 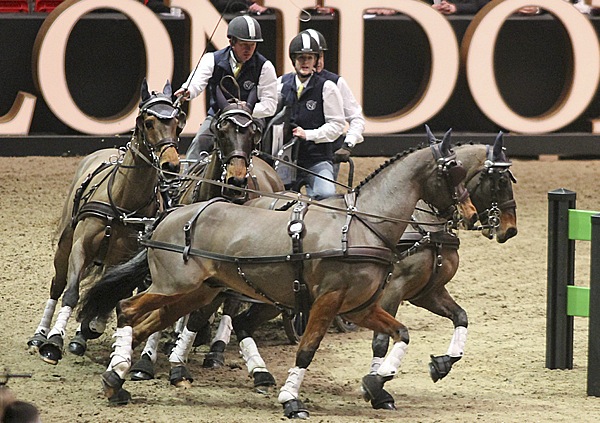 Ten points for second
Being the wild card driver in London Olympia, Boyd did not receive World Cup points, but has kept his second place in the standings behind IJsbrand Chardon (NED), who did not compete at Olympia. The maximum 10 points went to Theo Timmerman, who really needed these points in order to qualify for the Final in Bordeaux. Timmerman has completed his four events and is currently in third place in the standings. With his second place at Olympia, he has now guaranteed himself a ticket to the Final. Theo had one knock down in the first round, which he didn’t even notice. First to go in the Winning Round, Theo decided to go for it and put down a very fast time. The swingletrees of his carriage accidentally knocked a ball off the marathon type obstacle, but Theo was very pleased with the way his horses went and went back to the warm-up arena to watch his compatriot Koos de Ronde drive.

Expensive knockdowns
De Ronde was well on his way to stay ahead of Timmerman in the Winning Round, but he knocked a ball off the gate at the bridge and did the same coming back over the bridge again, resulting in the addition of 10 expensive penalty seconds to his time. De Ronde finished third and is currently in sixth place in the standings. De Ronde has a wild card in Mechelen (BEL) on 29 and 30 December and will compete for points in Leipzig (GER) on 18 and 20 January 2013, where he will have to do well to win enough points for the Final.

Confidence
Fredrik Persson (SWE) came fourth in Olympia after a very good performance. One of his horses didn’t make it through the horse inspection, but Persson drove very well with his four horses, which included two owned by Boyd Exell. Persson had already used Clinton Star in Geneva and the wheeler horse had Twister for company in Olympia. Twister was formerly owned by Theo Timmerman who had used the horse in the lead of his indoor team. Fredrik had lost his confidence a bit after his disappointing first performance in Stockholm, but he has been training with Boyd between Geneva and Olympia and this clearly paid off, as he stayed ahead of the German silver team members of the World Championships in Riesenbeck Georg on Stein and Christoph Sandmann.

Stunt horse
British driver Dan Naprous qualified for the wild card by winning the indoor competition at Addington in November. The professional stuntman used three of his outdoor horses in Olympia and one stunt horse, Bence, who normally does not go in his team. The black Lipizzaner gelding was in the lead of Naprous’ team and Dan was pleased with his performance. The Briton really enjoyed competing in Olympia and hopes to be able to qualify again for Olympia 2013.

Quotes:
Boyd Exell (AUS): “My horses were already ahead of the game on the first day, they were already very fast. I could hardly equal my time of the first day. The two knockdowns in the Winning Round were caused by a lack of concentration on my side. I had too much up my sleeve with 20 penalty seconds advantage. I am really pleased that Olympia has joined the FEI World Cup™ Driving, it has been a fantastic show.”

Theo Timmerman (NED): “I was watching Koos de Ronde in the Winning Round and when he hit the first ball, I saw he became a little insecure. When he had the second ball down I knew I would come second and that I could start booking my trip to Bordeaux.”

Koos de Ronde (NED): “The atmosphere in the arena was amazing, the crowd were fantastic. My horses went better than in Budapest. I knew that I had to keep going after the first knockdown because Theo was breathing down my back. I enjoyed driving this course and the way it was adapted to the size of the arena.”S

Standings after 6 of 8 events: