Most jackalopes are only heads, mounted on wood plaques for the rec room. This giant jackalope is full bodied, and inhabits the out-of-doors: on Center Street in Douglas, Wyoming, the town where the legendary horned rabbit of the West was invented some sixty years ago.

It is well over six feet tall and made of fiberglass: an irresistible place to have your picture taken. A sign outside of Douglas, which long a declared itself the Jackalope Capital of the World, warns motorist to Watch Out for Jackalopes despite the fact that Jackalope Hunting Licenses (available in many town souvenir stores) described it as “perhaps the rarest animal in North America.” 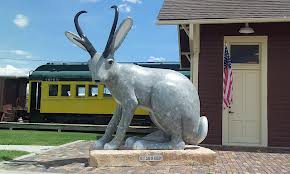