The quintessential Route 66 motel, with the prettiest sign in Albuquerque (the city with the best roadside signs in the West):  an Indian chief with a headdress in rainbow neon colors.

El Vado is a white adobe motor court build in 1937 in what some of its old postcards call “Spanish pueblo style,” which means a series of low-lying white units with exposed vigas outside and rough-hewn beam ceilings in the rooms. It used to advertise steam heat and tile baths; today it boasts tv and free local phone calls. It is spanking clean and picturesque enough to attract many customers who are traveling connoisseurs of the bygone American roadside, and who prefer its quaint charm to the no-surprises ambience of a chain motel. 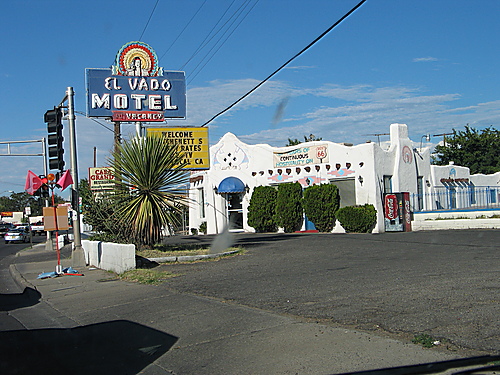