LAS VEGAS – Les Shepperson need not look far to be reminded what a gold buckle looks like.

The 34-year-old steer wrestler’s father, Frank, won the world championship in that event in 1975 and might just be wearing that gold buckle in Las Vegas as you read this.

In front of a sixth-round record-setting crowd at the Wrangler National Finals Rodeo in Las Vegas on Tuesday, Shepperson put himself in position to give the family a second gold buckle. Shepperson and Gabe Ledoux each brought down their steer in 4.0 seconds, sharing the sixth-round victory at the Thomas & Mack Center.

“It would mean everything; that’s been my whole life’s goal growing up,” said Shepperson, from Midwest, Wyo. “[My father won] before I was born, but I’ve seen pictures and old videos and stuff. He’s always shared stories.” 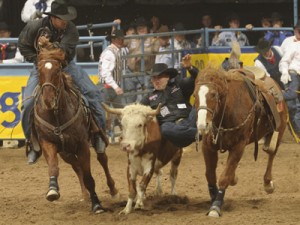 Officially, the $16,343 won by Shepperson Tuesday night leaves him in eighth place in the world standings, trailing world leader Luke Branquinho by $35,750. But Shepperson, who entered the 10-night rodeo in 11th place, leads the average race – which pays $46,821 to the winner – with a six-head time of 25.0 seconds.

With Branquinho in eighth place in the average, Shepperson rose to become a favorite after six nights, though the race will almost certainly come down to the final night on Saturday.

Ledoux helped his cause in similar fashion. Like Shepperson, the 32-year-old put together five solid runs to start the NFR, but he was looking to get tapped off.

“I had placed a little bit down in the rounds the last couple nights and it felt good to win a round, and split it with Les. I needed the money,” Ledoux said. “You’ve just got to go win everything you can. It’ll be fun. I try not to [look at the standings]. That doesn’t determine anything. You just try to go win.”

Ledoux came to the NFR ranked eighth in the world, and is currently second in the average behind Shepperson.

Leesville, La., cowboy Winn Ratliff rode Kesler Rodeo’s Star Burst to 83.5 points to begin the sixth performance and it held up to top the field by one point.

“It’s just an awesome feeling to have the opportunity to come here and then win the sixth round,” Ratliff said. “My mom said, ‘This is the one; we’re going to the South Point [to collect the go-round championship buckle]. I’ve been real hesitant to think I’d win, just taking it one horse at a time and not get antsy about it.”

The favorite to win a second gold buckle in a row is Kaycee Feild. The Payson, Utah, cowboy shared second place with three other cowboys in Round 6 and holds a $37,941 lead over three-time World Champion Will Lowe.

Most of the other races are far murkier at this point.

In team roping, Trevor Brazile – who clinched the world all-around championship for his 17th gold buckle on Monday night – and Patrick Smith lead the world standings and finished second in the sixth round, but they’re sixth in the average race.

That lead belongs to Chad Masters and Clay O’Brien Cooper, who have caught six steers in 43.9 seconds. Colby Lovell and Russell Cardoza are further back in the world standings, but rank third in the average and won the go-round with a 3.5-second run. 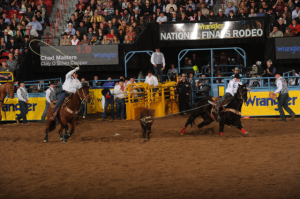 “When I heard everybody yelling that Colby was good at the barrier and I saw his loop go around the horns that fast, I was just thinking, ‘Rope two feet,’” Cardoza said. “I think my eyes lit up pretty big when I saw his rope go on.”

“It’s still too early to worry about the average,” Lovell said. “I don’t want to do anything dumb by any means, because we’re still in the average, but if I get that kind of start and they’re right there, then you have to go for it.”

“This was a big deal tonight, because last night I stubbed my toe and missed an opportunity,” Sundell said. “I was embarrassed a little bit last night, because I thought that horse made me look kind of stupid. Today I was ready for some revenge and really went after that horse.”

To muddle the race even more, Cody DeMoss is the only bronc rider to post a score on each of his first six rides and leads the average with 472.5 points.

In tie-down roping, Ryan Jarrett and Clint Robinson – a pair of cowboys who rank in the top 10 in the world all-around standings – shared the go-round title with 7.2-second runs.

“Both of those horses that Ryan and I used were mine, and we’re best friends,” Robinson said. “We rode together all year long, so it’s a pretty neat deal to split a round on those horses.”

Neither Tuf Cooper, who leads the world standings by less than $6,000, nor Justin Maass – who ranks second behind Cooper  – placed in Round 6. Maass is third in the average race, while Cooper and five-time World Tie-down Roping Champion Cody Ohl are tied for fifth.

In similar fashion to the tie-down roping, the top two bull riders in the world did not post a score in the sixth round, so there was no change between three-time World Champion J.W. Harris and NFR rookie Cody Teel, who are separated by  a little more than $7,000.

Beau Schroeder, another NFR rookie, had already placed in three rounds and added a go-round buckle to his accomplishments by riding Frontier Rodeo’s Feeling So Fly for 89 points.

“I’m sure there’s a party and everybody is excited right now,” the China, Texas, cowboy said. “It’s a town of about 1,400 people and there’s only one stoplight, so if you blink, you’ll miss it. I didn’t like the last two days, because I didn’t have my phone blow up at all, but tonight I hope it rings off the hook.”

Schroeder has moved from 12th to fourth since the start of the NFR and leads the average race with 343.5 points on four rides, 7.5 better than Seth Glause.

Barrel racer Mary Walker not only continues to lead the race for the Ram Truck Top Gun Award – given to the top earner in any one event at the NFR – but she snared the world standings lead from Brittany Pozzi. While Carlee Pierce won the round in 13.51 seconds, Walker finished second and holds a $12,869 lead in the race for the gold buckle.

The 17,375 on hand Tuesday set a new attendance record for the NFR’s sixth round. The races will continue to take shape in Round 7, which begins at 6:45 p.m. Wednesday night. 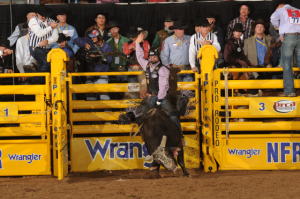