After two nights at the Wrangler National Finals Rodeo, they both now have some catching up to do.

Two-time World Steer Wrestling Champion Dean Gorsuch moved to the top spot on the second of 10 nights at the Thomas & Mack Center before Reigning World Champion Tuf Cooper moved to first place in the tie-down roping, giving the world’s richest and most prestigious rodeo three lead changes over the first two nights.

Gorsuch, from Gering, Neb., moved to the top of the heap by finishing second for the second consecutive night. Thouvenell suffered a no-time, which could prove especially costly in the lucrative average race, which is commonly a major factor in determining the bulldogging world champion.

Cooper, who took a big step in catching Maass by winning the first round, tied for second behind his brother, Clif, and has made $31,919 in the first two nights of the rodeo. He leads Maass by $11,340 entering Round 3. 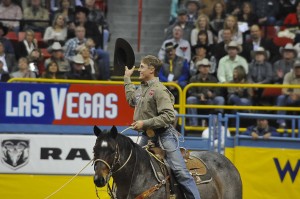 The saddle bronc riding race also got much more interesting when world leader Jesse Wright was bucked off in the second round. He still holds a lead of more than $17,000, but his closest pursuers are all 2-for-2, including second-place bronc rider Wade Sundell. Sundell, Jake Wright – Jesse’s twin brother – and Cort Scheer shared the second-round victory with 84.5-point rides.

“I hadn’t been on in a long time, and to come here after these first two horses back, I feel good and I’m ready to rock and roll,” said Sundell, who had been out since early September due to a knee injury. “The knee feels awesome and I think it’s where I need it to be.”

“I’m loving this and I can’t wait for tomorrow,” said Jake Wright, after earning checks in each of the first two nights of his first NFR appearance. “I’ve always wanted to come here and do really good and it’s come true.” 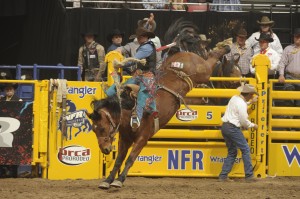 A couple of ProRodeo’s world leaders bucked Friday’s trend by adding to their leads.

The reigning world champion has qualified for the NFR five times, and on Friday won at least a share of the second-round title for the fourth time. In fact, it was his fourth in a row as he scored 86.5 points on Carr Pro Rodeo’s Riverboat Annie, matching three-time World Champion Will Lowe’s effort on Classic Pro Rodeo’s Bi Polar.

“I was a little rusty last night,” Feild said of his first-round ride on Thursday. “I disappointed myself; I rode like a pansy. It’s almost like you’re trying too hard and beating yourself up before you even get on. I redeemed myself tonight. I loosened up and had fun. This feels good.”

Despite his frustrations, Feild, from Payson, Utah, finished fourth in the first round, and after two nights leads the average with a total of 171 points on two rides. “Everyone wants to be the rankest person out there,” the Canyon, Texas, cowboy said. “Sometimes it works, sometimes it doesn’t.”

It’s worked out well for bull rider J.W. Harris over the first two nights. After snagging the world lead on the first night of the NFR, he rode Frontier Rodeo’s Cowboy Compactor for 88 points and second place on Friday.

He and his buddy, Cody Whitney, share the distinction of having earned the most money of any ProRodeo cowboys over the rodeo’s first two nights. They each have a first- and a second-place finish, earning them $32,686. Whitney won the second round with 89 points on Wild Card Rodeo’s The Grinch. 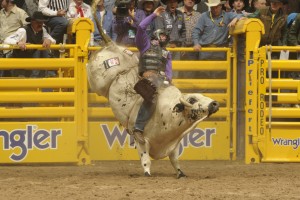 “I know what my abilities are, and I don’t want to sound arrogant but I would match my skills against anybody in the world – J.W. Harris or anybody else,” Whitney said. “I’m focused on riding bulls and in 10 days they’ll tell us who wins what, that’s just the way I’m looking at it.”

However, the early leader in the race for the Ram Top Gun Award – given to the top earner at the NFR – is 53-year-old NFR rookie barrel racer Mary Walker, who won for the second consecutive night. With $36,514 in earnings, she’s pulled within striking distance of world leader Brittany Pozzi.

While it was Gorsuch taking the lead in the steer wrestling world standings, it was Billy Bugenig who shook off a first-round no-time to win the second round, tackling his steer in 3.6 seconds.

“[Thursday] night didn’t start good, but we have an opportunity to go 10 nights, so I just told myself to treat every night like a one-header and see how much money I can win,” the Ferndale, Calif., cowboy said. “It’s a good start.”

Clif Cooper needed a last-minute dash to secure his spot at the NFR and entered in 15th place, but moved up five places, into the top 10, thanks to his $18,257 windfall for winning the second round.

“I put a lot of work and effort coming into this year’s NFR, and feel better than ever that I’m ready for this week,” said Cooper, from Decatur, Texas. In a wide-open team roping race, Texans Luke Brown and Martin Lucero grabbed the second-round title with a 4.0-second effort, the fastest run of the rodeo thus far.

“That steer ran hard and went to the right when we were breaking them in a few days ago, so I wanted to take a real aggressive start at him,” Brown said. “The first shot at him was probably going to be the best. … I wasn’t pumped up enough last night, and I wasn’t as aggressive as I should have been, but tonight it all worked out perfect.”

“He had it on him so fast I kind of panicked and just tried to get my horse inside the turn and get a swing over his back,” Lucero said. “We came tight really fast after I caught him, and I think that’s what let us win the round.”

The first two nights have gone rather injury-free, though bull rider Ardie Maier remains questionable with a lacerated riding hand (he rode through the injury Friday but was bucked off) and bull rider Seth Glause is listed as probable after suffering a fractured and lacerated nose following an 86.5-point ride Friday night.

The rodeo continues with the third of 10 performances at 6:45 p.m. Saturday.