For the Laughter, owned by Dr. Betsee Parker of Middleburg, VA and shown by Meredith Darst, was awarded the Grand Pony Hunter Championship, sponsored by the Bedard Family, at the 67th Annual Pennsylvania National Horse Show on Saturday afternoon. There were cheers and tears at the presentation as Dr. Parker was overcome with emotion over the latest accolades give to “Bubbles” as the pony is affectionately called.

“This was a big win for him today. Bubbles has lost this four times, two of the years he lost it to my other pony,” said Dr. Parker. “I don’t cry or tear up often, but today I did because this was a big win for him.”
Bubbles also received the Large Pony Hunter Championship title, sponsored by James E. Fogerty. The Reserve Championship was won by Happily Ever Laughter, owned and ridden by Madison Goetzmann of Skaneateles, NY. 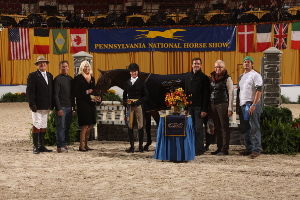 Peacock Ridge of Greenwich, CT, received both the Champion and Reserve Championship ribbons for their ponies in Small Pony Hunter division. Q2, ridden by Yasmin Rizvi, was named Champion; and First Edition, ridden by Farah and Yasmin Rizvi, was Reserve. Yasmin rode First Edition for her sister on Saturday because Farah injured herself while schooling. The 11-year-old rider took it all in stride.

“It was nice to have two chances,” said Rizvi. “I love them both and they both did really well.”

Yasmin also won the Best Junior Rider – Pony, sponsored by Joan Barrett. She was thrilled with her award. “I never expected to win, but it’s really exciting.”

The Medium Hunter Reserve Champion was Laugh Out Loud, owned and shown by Francesca Dildabanian.