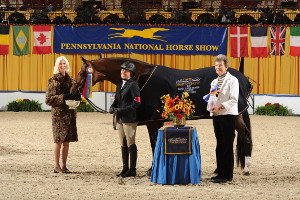 Dr. Parker owns many horses, but due to an injury she is no longer able to show. She takes great pleasure in watching others ride her horses, especially “Tori.” They have been together since Colvin was eight-years-old.

“There’s something magical when you share it,” said Dr. Parker. “Today it happened to work out really well for us in both divisions and I have Tori to thank. I personally believe she is the greatest junior we have ever seen and I’ve been around a long, long time. I know I’m partial.”

Dr. Parker’s horses carry a bonus with them each time they enter the arena. “Every time these animals go in there we save another ten dogs because all of the earnings go to Danny and Ron’s Rescue. The team works so hard and the horses work to be their best. It’s really gratifying when everything comes together like this.”

The tricolor in the Small Junior Hunter-—Riders 16 & 17 Championship, sponsored by Peacock Ridge, was presented to Confidential, an 11-year-old chestnut gelding owned by Don Stewart, Jr. of Ocala, FL, and ridden by Hasbrouck Donovan. The Reserve Championship was won by the 10-year-old grey gelding Kid Rock, owned by Jacob Pope of Columbia, MD, and ridden by Lexi Maounis.

Garfield, a 10-year-old chestnut gelding owned and ridden by Alexandra Crown, took top honors in the Large Junior Hunter-—Riders 16 & 17 Championship, sponsored by the Perform Group. The Reserve Champion was won by the 9-year-old gelding Wagner, owned and ridden by Hasbrouck Donovan of Gainesville, FL.