Great Britain’s new shining star, Charlotte Dujardin, brought the crowd to their feet and the London 2012 equestrian events to the perfect conclusion when securing the individual Olympic Dressage title as winner of the Grand Prix Freestyle this afternoon at Greenwich Park.

Last of the 18 to line out today, the 26-year-old rider scored a magnificent 90.089 to pin The Netherlands‘ Adelinde Cornelissen and Parzival into silver medal position, while the host nation had even more to celebrate when Laura Bechtolsheimer and Mistral Hojris claimed the bronze.

On Monday, Dujardin was part of of the team that claimed Britain’s first-ever dressage medals in the history of the Games, and golden ones at that. The sport is in an exciting period of change and suddenly, it seems from almost out of nowhere, the British are right on top of the game.

As the FEI Eventing Chairman, Giuseppe della Chiesa said this afternoon, somewhat tongue-in-cheek, “two golds for Germany in eventing, and two golds for Britain in dressage – the world has turned upside down!”

“We did a super warm-up”, he said afterwards. “We can’t blame the heat, we are used to that, and I had plenty of horse – there were just too many mistakes. That is it for Ravel. He is retiring now to his owner’s stud in California. I will remember him for his great career. If you put it all together, today was only a glitch.”

The Netherlands’ Edward Gal charmed the packed stadium with some great passage and piaffe to a dramatic musical backdrop as he racked up 80.267 with Undercover, before his team-mate, Anky van Grunsven, raised the bar even higher with 82.00 for Salinero. It was an emotional day for the 42-year-old rider who had already broken the record when picking up team bronze on Monday at her seventh Olympic Games. She now has nine Olympic medals to her credit, but the retirement of the horse that helped her win two of her three back-to-back individual golds has been on her mind all the time.

“I am really happy, it was a good test on his last competition ever,” she said. “I am so happy he kept going for four days and did everything well for me. I am not sad. It has been an emotional week, but it was always in my head that it was my last time and I wanted to enjoy it.”

And she was still out in front as the last six took their turn, with  Spain’s Juan Manuel Munoz Diaz disappointing slightly with his ride on his lovely grey stallion Fuego, and Kristina Sprehe and Desperados not quite surpassing the leading score when scoring 81.375 for a test that included one-handed piaffe. The German rider admitted to being more nervous than she had been in Monday’s team medal decider, but was very happy with her performance.

“That was my best freestyle ever,” she said. “I could raise the difficulty and rode the piaffe pirouette one-handed. I am quite relieved that Desperados kept having fun and ambitions over all these days here.”

Whole New Standard
Her silver medal winning team-mate, Helen Langehanenberg, set a whole new standard as the final group kicked off, her lovely stallion, Damon Hill, stretching the target to 84.303 to put it up to the rest of them. The final German contender, Dorothee Schneider, on her last ride with the fabulous 10-year-old Diva Royal. The mare will in future be partnered by rising German talent Stella Roth whose mother, Katharina Roth, owns the horse. They didn’t threaten the lead when posting 81.661 and Schneider was a little disappointed.

“I had two mistakes and this is something you should avoid when riding at the Olympics,” she said.  But she knew she had done something special over the last few months, only coming into the German panel following a great performance at Aachen and contributing superbly to Germany’s team silver result.”I am at the Olympic Games, I came into the team at the last minute. All this is more than I ever expected,” she said.

Now it was down to a British/Dutch battle, although it was a bit one-side with three for the home nation and Adelinde Cornelissen flying a lonely Dutch flag.  She would fly it very high however.

Chasing
It was the 84.339 registered by Britain’s Laura Bechtolsheimer and Mistral Hojris that she was chasing as the entered the ring. Bechtolsheimer’s opening trot extension was breath-taking and as her horse drummed his way though great piaffe and passage it was clear she was going out in front.

“Alf (Mistral Hojris) just got better and better each time in the ring here and today I just wanted to go out and do an awesome Freestyle and he rose to the occasion. He gave me a very special ride, and to finish like that I felt I’d done him justice,” she said, having soared into the lead with 84.339.
That was followed by Carl Hester and Uthopia whose balanced passage and spectacular extended trot left him just behind Langehanenberg’s score on 83.857.

But Cornelissen broke completely new ground with Parzival’s massive trot extensions, floating transitions and amazing piaffe pushing the target-score to 88.196. It was a case of “beat that” from the double FEI World Cup champions as Dujardin rode into the ring.

And you could hear a pin drop as the 26-year-old Briton set off into a test that displayed the softest of movements that were, however, sometimes lacking some of her horse’s usual dynamism. With hands like silk, and an accompanying thoroughly British score that was both haunting and stirring, the young woman who has taken the sport to a whole new level racked up no less than 13 maximum 10s on her way to putting 90.089 on the board.

Bechtolsheimer had aready broken the Olympic record at just over 84.000. Dujardin smashed that to pieces. Not even a momentary mistake in the movement before the final ride up the centre line could stop this glorious moment. Great Britain had gold and bronze, and The Netherlands were left with silver.

Scoring
Asked afterwards about the scoring that gave Dujardin the edge over Cornelissen today, the President of the Ground Jury, Stephen Clarke, explained: “the first two horses were very close.  The impression we had was that Adelinde’s horse showed huge power and expression but for us it needed more lightness and a softer carriage. Charlotte’s horse showed more self-carriage but was not so expressive in passage and piaffe,” he said.

Dujardin explained that her horse’s mistakes were due to “pure greenness and tiredness.  I’ve had three amazing rides and I couldn’t have asked any more of him (Valegro),” she said.

Cornelissen said “Parzival felt great and that was one of his best tests ever. He gave it all” she added.

Dujardin talked about the involvement of her mother in supporting her career and was looking forward to a big celebration with Team GB on a boat on the Thames this evening.  “It’s going to be fantastic, everyone from the team is going to be there and we are all going to have a great time!” she said.

Fantastic Games
FEI Bureau member, and the man behind the prestigious CHIO in Aachen, Germany, Frank Kemperman reflected the thoughts of many when he said today, “these have been the most fantastic Games and I have enjoyed myself so much. I never thought I would like to spend two whole weeks in London, but I have loved every minute. The equestrian events have been organised so well and Tim (Hadaway) and his team should be very proud. I have never been to a competition where the audience has been so fair to every rider. The German eventing win was wonderful for our sport at home and the British sporting spirit came through. The spectators gave us nearly – but not quite – as many cheers as for their own team that won silver.”

The British took the greatest number of medals in the equestrian events at London 2012, but the biggest winners was the sport itself which has reached a massive new audience.  The perfect celebration of 100 years within the Olympic movement.

London 2012 marked 100 years of equestrian sport within the Olympic movement.

For the first time, the Grand Prix Freestyle was the final equestrian event at an Olympic Games.

For the first time at the Olympic Games there were seven Dressage judges (previously five) and a Judges Supervisory Panel.

Great Britain won the greatest number of equestrian medals at the London 2012 Olympic Games – 5 in total – 3 gold, 2 silver and 1 bronze.

Juan Manuel Munoz Diaz (ESP): “We just had one mistake. My horse felt very tired and it was very, very hot out there. He is going on holiday now. I am having a week off myself and then I am off to Brazil and Canada. We have performed that test many times. It just wasn’t great today.”

Laura Bechtolsheimer (GBR) talking about her Freestyle test with Mistral Hojris: “For a horse of his age, at 17, to move like that and give his all is beyond words. He was so full of power and energy. I could ride every move to the maximum. It was definitely the best ride I have ever had on him. I felt as if I was pressing buttons and getting the right answers. I think he enjoyed the music. It was the first time he had really got involved and the Lion King music really suited him with his colour. That (The Lion King) has always been my favourite film from childhood and that is why it was our choice today. The music suits him because it is childish and playful just like him. He is 17 years old but he has never grown up.”

Laura Bechtolsheimer (GBR) talking about the future for her horse, Mistral Hojris: “He’s not a tennis racket. He is a living animal. He is part of the family and the furniture.”

Steffen Peters (USA) talking about the London 2012 Olympic Games: “It was all so fantastic. I thought the judging was very fair and I give a big A+ to London 2012.” 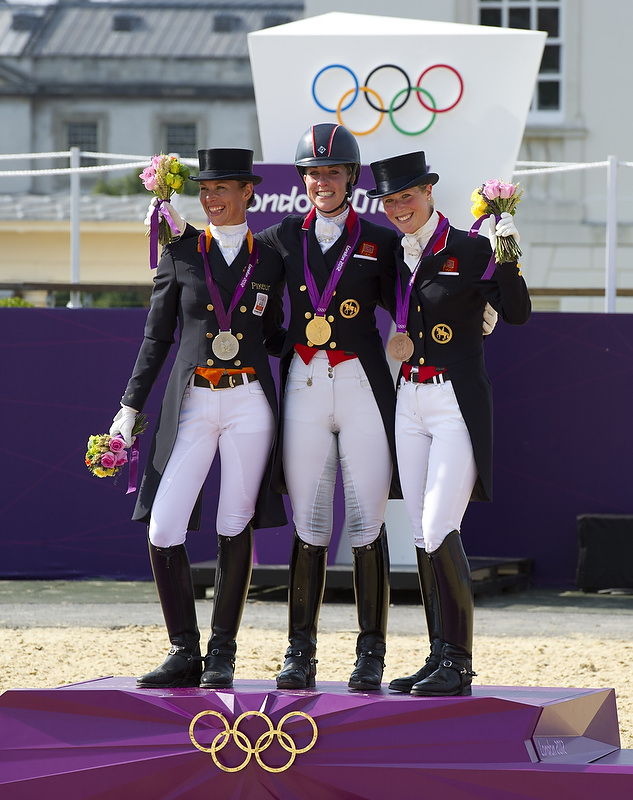