The date of Wootton’s birth is debatable but 1683 is most likely. He is thought to have been born in Snitterfield, Warwickshire. He studied under Jan Wyck and possibly Siberechts, as a watercolour is recorded signed by both Wootton and Siberechts. As Siberechts was at least fifty years older it would seem likely that it was a student/master collaboration.

Vertue, who is not always a totally reliable source, suggests that in his early life Wootton was a page to the daughter of the Duke of Beaufort and that it was under the Duke’s patronage that he visited Rome. It seems more likely that the obvious classical influence of such painters as Claude and Gaspard Poussin was received from studying the paintings in the important English collections that he would have had access to via his clients. He was a member of the Society of Virtuosi of St. Luke and obviously took a wide interest in art. He was also a founder member of the Academy of Painting in 1711. As the first Englishman to paint horse portraits, he was considered to be the horse painter to the aristocracy for half a century, and the Earl of Egremont referred to him as ‘the best horse painter in England’.  His portraits were often life-size and he painted most of the famous racehorses of his time. When the portrait included a figure of some importance he frequently collaborated with a leading portrait painter to paint the rider. These artist included Thomas Hudson, Dahl, Richardson, and Hogarth. One of these paintings was of George II, and Vertue records a visit by Queen Caroline to Wootton’s studio, a ‘large noble painting room’, to view this picture. Frederick, Prince of Wales, became one of Wootton’s major patrons and it was for him he painted one of his large hunting scenes ‘The death of a stag’ in 1737. 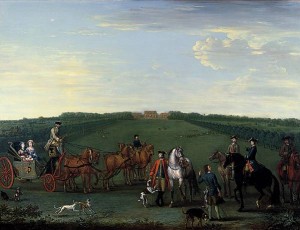 Wootton’s large hunting scenes are even more strongly influenced by Jan Wyke that his portraits, and they are extremely close in style to his friend Peter Tillemans from whose work Wootton’s is sometimes hard to distinguish. He is very transitional in style; his portraits are totally naïve and English, while his large hunting scenes are still in the Flemish style. It is probably fair to say that his racing scenes are the most transitional of all, being a true mixture of Flemish charges and English stylized racehorses. These scenes were masterpiece of composition and activity and included great numbers of people and horses. In these pictures he proves himself to be the greater master than Seymour, possessing the true ability for creating distance and landscapes in the manner of Claude, although in the paintings of horses Seymour was the more accurate observer. Wootton also painted English country houses. 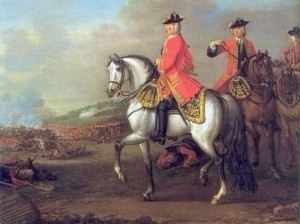 Wootton’s contemporaries believed him to be the highest paid artist in England. For his large paintings he received 40 Euros, a large sum in those days! Towards the end of his life he suffered from failing eyesight and not lone before his death, sold off the accumulation of pictures in his London house. He died on November 13th, and was buried in London. Much of Wootton’s work was engraved.