The second son of Robert Pollard and Ann Iley, this artist was born in Islington, and was tutored and guided by his father who, from quite early in his son’s life, desided that he should be encouraged to be a horse painter. He was given some help by his father’s friend, Thomas Belwick the engraver. For a time he took to etching with enthusiasm and worked hard in his father’s business, but his painting of horses and coaching was already sufficiently good for Edward Orme the Kings’s print seller, to commission him to paint an inn signboard showing a coach and horses. Before taking its place outside the inn the sign was displayed in Orme’s shop window in Bond Street. The Austrians Ambassador saw the picture, was very impressed and soon Pollard was established as a successful painter of sporting scenes. In 1825 he married Elizabeth Ridley and during the course of the next five years the family business was gradually dissolved, the premises finally being sold in 1831. The next ten years were a successful time and much of his work was engraved. In 1840 his wife and daughter both died and Pollard was badly affected by this tragedy losing the will to work or even to live, his other children being left to be brought up by aunts. By 1842 he was painting again but his old sparkle had disappeared. He was forced to paint many ‘bread and butter pot boilers’ to earn a living. His relations with his father were also a little strained and times became so hard that towards the end of life he had to apply to the Artists’ Benevolent Fund for help. Pollard spent his last years living with his son, James Robert in Chelsea, where he died on October 15th at 22 Robert Terrace (now Sydney Street); he was buried in Hornsey Churchyard. 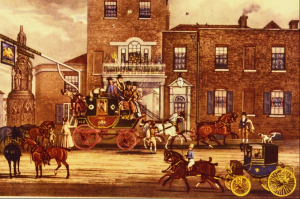 N.C. Selway has made an extensive study of Pollard and tells us that his work can be divided quite into decades. In the 1820s he was pointing and engraving for his father and working in oil and watercolour. It was at this time that he found his first success. This promoted, in the second half of the 1820s, the production of a number of fine and large coaching scenes. In the 1830s, the most affluent time of his career, he also expanded into racing, fishing and hunting scenes. He combines on several racing scenes with J. F. Herring senior: he painting the crowd scenes and backgrounds, at which he excelled, and Herring the horses. This collaboration with Herring had not lasted very long when his wife and daughter died and his whole way of life was shattered. After this his work is often quite inferior. He painted many smaller pictures during this period which were often little more than works intended to produce the necessities of life. 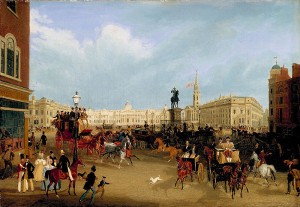 Pollard’s work has an importance of its own in that it is so documental of the coaching period. It has certain charms and a fairly individual style, but Pollard was never the greatest of horse painters, just better than many of his contemporaries. At his best his horses were very well drawn, accurately observed and full of vitality. This was presumably painted at the peak of his career just before his family tragedy. He understood well the conformation of a horse and at times captured movement better than most. The activity and freedom of movement of the horse is again well captures in ‘The winner.’ Here also one sees Pollard’s ability to paint crowd scenes. This is shown further in ‘The Derby, 1833.’ ‘The Norwich Times in the Mile End Road’ shows the type of picture for which Pollard is best known.  In these pictures Pollard’s horses became strutting regimental patterns but were still well drawn, and are all examples of his best work. Artists frequently vary quite considerably and we know that his work declined rapidly in the 1840s and 1850s. It is also known that he was one of the artists faked by J. Sinclair.

Selway tells us that about 343 of his works were engraved and of these Pollard engraved about 146. He also engraved twenty-three plates after other artists.