ELMONT, N.Y. – Zo Impressive took advantage of a tiring pacesetter in Contested and held off a late surge from Disposablepleasure to win Saturday’s 56th running of the Grade 1, $300,000 Mother Goose at Belmont Park.

After breaking sharply from post position 5 under Rajiv Maragh, Zo Impressive was taken back to settle on the outside in third as 1-2 favorite Contested opened up 1 ½ lengths on longshot Wildcat’s Smile through a quarter mile in 23.08 and a half in 46.47. Asked for run leaving the five-sixteenths pole, the front-running Acorn winner came up empty. Zo Impressive, meanwhile, was set down to duel with late-running Disposablepleasure, whom she bested by three-quarters of a length. The final time for 1 1/16-miles was 1:44.28 over a track rated good.

Kentucky Oaks winner Believe You Can, who tracked the leaders from the inside throughout, finished third, followed by Wildcat’s Smile and Contested. A jockey’s objection by Ramon Dominguez, the rider of Disposablepleasure, against the winner for alleged interference in the stretch run was disallowed by the stewards.

“Maybe the biggest difference was the Acorn had a very speed-favoring track, and Contested got an uncontested lead,” said Maragh, who rode Zo Impressive to a runner-up finish in last month’s Grade 1 Acorn. “[Today] several horses gave her more respect and put on pressure, and that help me beat her. The pace was a little hot [in the Acorn] and they got away from me more than I wanted. I had too much ground to make up. We wanted more of a tracking position today.”

It was the first graded stakes win for Zo Impressive, who now owns three victories and a pair of second-place finishes from five starts, with $349,800 in earnings for Charlotte Weber’s Live Oak Plantation. Sent off the 6-1 third choice in the wagering today, she returned $14.60 and topped a $95 exacta with 10-1 Disposablepleasure.

“I don’t think [more distance] should hurt her any,” trainer Tom Albertrani said of Zo Impressive. “We’ll see when we get to Saratoga with two turns again, try to stretch her out to a mile and an eighth [in the TVG Coaching Club American Oaks (Grade 1, $300,000 on Saturday, July 21 at Saratoga Race Course)]. We’re just happy to get the Grade 1, that’s important, and as long as she comes out of the race healthy, that’s really what we want.”

Jim Barnes, assistant to Hall of Famer Bob Baffert, who trains Contested, said his filly seemed to struggle somewhat with the surface.

“I think the track she ran on in the Acorn was just a much different track,” Barnes said. “This was kind of wet down deep inside and kind of a dead track, didn’t look like it had life to where they were bouncing over it. She looked to be running fairly easy early, but I knew at the top of the stretch, or even before then, that we were in serious trouble.” 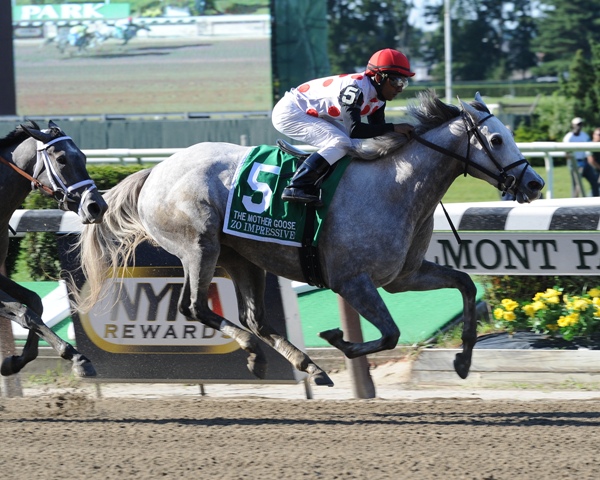