ELMONT , N.Y. – With a masterful display of derring-do, jockey Ramon Dominguez charged Desert Blanc down the stretch of the Belmont Park inner turf course and right between his front-running rivals Saturday to win the 111th running of the Grade 1, $500,000 Woodford Reserve Manhattan for 3-year-olds and up.

The reigning, two-time Eclipse Award-winning jockey, in his first ride aboard Desert Blanc, kept a snug hold on his mount while tracking favorite Hudson Steele through a half-mile in 49.42 seconds and six furlongs in 1:13.61 in the 1 ¼-mile race. As Papaw Bodie, ridden by Rosie Napravnik, engaged the leader turning for home, Dominguez turned Desert Blanc loose.

With Hudson Steele fading on the inside and Papaw Bodie digging in, Desert Blanc went between a slim gap and beat Papaw Bodie to the line by a nose. Boisterous rallied from seventh and last to finish third, 1 ½ lengths behind the runner-up.

The winner, bred in England and raced in France before being purchased for Swift Thoroughbreds Inc. and Mackie Racing by bloodstock agent Peter Bradley, won in 1:59.65 on a course labeled firm. The victory gave trainer Chad Brown his first victory in the Manhattan .

“I had a great trip,” said Dominguez, who won five races on Saturday’s card at Belmont , including the Grade 1 Longines Just a Game aboard Tapitsfly. “I was fortunate enough to get in between horses turning for home, and he was pretty determined to get up. I was concerned about the lack of early speed, but I was just trying to do my best to keep him cool and we prevailed at the end.”

After his private purchase, Desert Blanc had a seven-month layoff and returned to racing with a second in the Grade 3 Fort Marcy at Belmont on May 5.

“I thought we could move him forward in start No. 2,” Brown said. “He’s looking for firm ground, and he got it today. It’s a wonderful race. I got third [in 2010] with Expansion and got a little taste.”

The Manhattan shaped up largely devoid of pace, and Hudson Steele, coming off back-to-back wins at Pimlico, seized the lead from his outside post under jockey Javier Castellano and set moderate fractions. With speed horses faring well recently on the Belmont turf, the field was fairly compact throughout the race, separated by about six lengths from front to back.

Napravnik raced close up throughout aboard Papaw Bodie as she did in her prior two starts aboard the gelding. Three wide in the lane, the pair battled hard to go with Desert Blanc and just missed.

“I was nosed out at the wire today,” she said. “I was on a horse that was every bit as talented as the winner. He’ll have his day.”

The 4-year-old Desert Blanc won for the fourth time in his seventh career start – his first victory in the United States – and earned $600,000 for the owners and increased his lifetime earnings to $728,133. 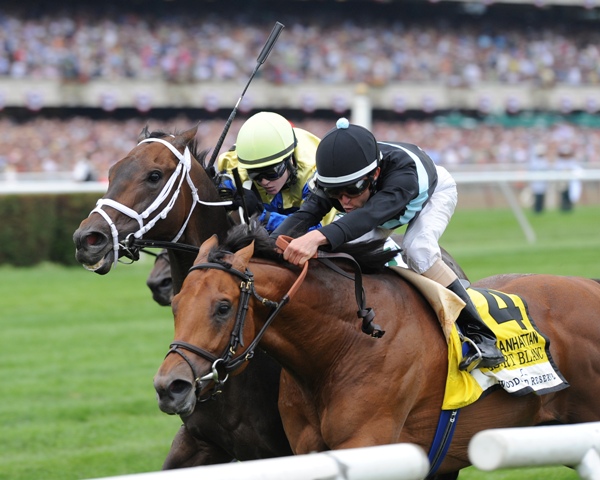