BELMONT, N.Y. – It’s Tricky wore down pacesetter Cash for Clunkers in deep stretch Saturday afternoon at Belmont Park and went on to a three-quarter-length victory in the $400,000 Ogden Phipps to remain undefeated in 2012 and notch her third career Grade 1 win.

“I put her right there, gave her a shot, and in the stretch she had to make her run,” said winning jockey Eddie Castro. “That’s her.”

“For a filly that hasn’t really been pressed to the wire, she just really ran her eyeballs out,” said Rick Violette, trainer of the runner-up. “I am really, really proud of her.”

Finishing third, 1 ½ lengths back, was Awesome Maria, whose six-race win streak came to an end.

“I thought she ran pretty well,” said Awesome Maria’s trainer, Todd Pletcher. “I think I did a really poor job preparing her for this race. We stayed in Florida too long, got rained on a lot, missed a couple of works down there. Then I tried to make up for it here and breezed her on a sloppy track.  I really did a bad job preparing her for this race. It wasn’t her fault. I’ll take the blame for it.”

It’s Tricky completed the 1 1/16 miles in 1:41.73 as she added the Ogden Phipps to her Grade 1 victories in last year’s TVG Acorn at Belmont and TVG Coaching Club American Oaks at Saratoga Race Course. The Godolphin Stable color-bearer is 3-0 this year, having won the Grade 2 Top Flight and the Grade 2 Distaff at Aqueduct Racetrack.

“She’s a special filly, said winning trainer Kiaran McLaughlin. “Eddie rode her very well. Rick Violette’s filly was tough, wow! We just did get there. From the three-sixteenths pole to the eighth pole, I was worried – she wasn’t there yet. She ran great. We’re not sure what’s next for her.”

Completing the order of finish behind Awesome Maria were She’s All In and Juanita. 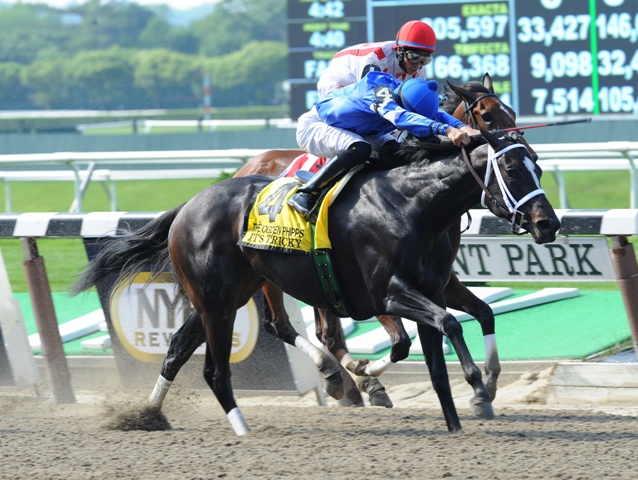