BELMONT, N.Y. – Better Lucky made her turf debut a winning one, taking the lead in deep stretch and holding off the furious late drive of Regalo Mia Monday afternoon at Belmont Park to take the Grade 2, $200,000 Sands Point by a nose.

The 3-year-old Ghostzapper filly, whose victory over a muddy track in her previous start prompted trainer Tom Albertrani to try her on the turf, saved ground within striking range of pacesetter Preach Tome Daddy as she led through an opening quarter-mile in 25.60 seconds and a half in 49.74. Tipped the outside by jockey Eddie Castro as the field turned for home, Better Lucky moved up to duel for the lead with Zultanite through the stretch, edging clear in the final yards and hitting the wire a heartbeat ahead of the fast-closing Regalo Mia.

“Coming into the stretch I moved to the outside and she gave me all that she had,” said Castro. “She tried really hard and held for the photo finish.”

“From past experience, I’ve seen horses run well in the mud [and then run well on the grass],” said Albertrani. “It’s kind of a different angle, you’re not always certain it will work, but sometimes it does. It certainly did today. We’re very excited that she was able to win this race and we’ll just pick a spot down the road for her.”

Zultanite held for third and was followed under the wire by favored Somali Lemonade, Preach Tome Daddy, Modulate, Firehouse Red, and Dreaming of Cara. 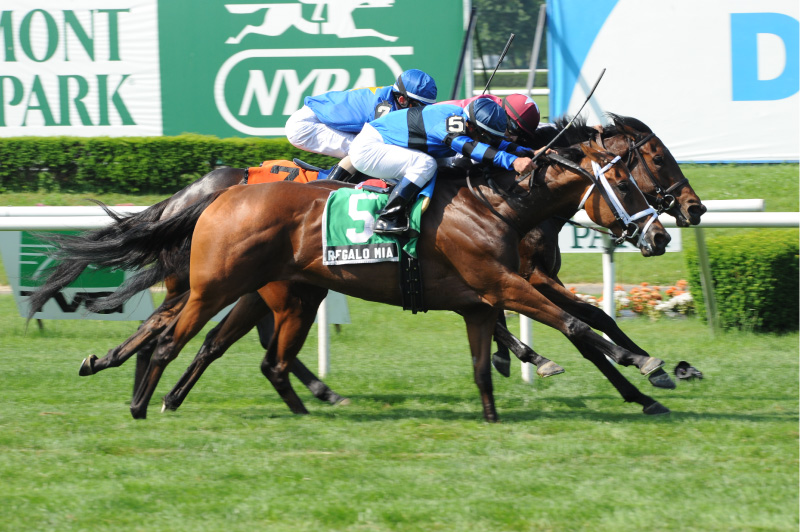