BELMONT, N.Y. – Although Dale Romans has Dullahan slated to face Triple Crown hopeful I’ll Have Another in the June 9 Belmont Stakes, it is Monday’s Grade 1, $750,000 Metropolitan Handicap, not the “Test of the Champion,” that the trainer said could end up being “the race of the year.”

“[The Met Mile] has quality horses, and I’m glad to be part of it,” said Romans, who will send out Shackleford in the Memorial Day feature. “I wouldn’t be surprised if we see a champion in this race.”

Four Grade 1 winners, a Grade 2 winner, and a New York-bred riding a five-race winning streak were entered in the Met Mile, which will be conducted for the 120th time on Monday and will serve as the first North American Breeders’ Cup Challenge race this year. As part of the “Win and You’re In” series, the Met Mile offers the winner’s connections a waiver of the $30,000 in entry fees for the Breeders’ Cup Dirt Mile and a $10,000 travel allowance, should he be nominated to the Breeders’ Cup program by October 22. The foal nominator or horse owner will also receive a $10,000 breeder award.

The one-mile Metropolitan Handicap will be run as race 10 on the 11-race holiday card, which also features the Grade 1, $300,000 Acorn for 3-year-old fillies, the Grade 2 $200,000 Sands Point for 3-year-old turf fillies, and the Grade 1, $400,000 Ogden Phipps Handicap for fillies and mares. Together, they comprise a $500,000 Guaranteed All Graded Stakes Pick 4, beginning with the Sands Point in race 7. MSG+ will show the Met Mile and the Acorn live during a telecast that runs from 5-6 p.m.

The Met Mile will be the second start of 2012 for To Honor and Serve, who prepped for the race with a 5 ¼-length victory over Monday’s course and distance in the Grade 3 Westchester on April 27.

“He’s had two good works [since the Westchester ], and he seems to be looking good,” said Hall of Famer Bill Mott, who trains To Honor and Serve for Charlotte Weber’s Live Oak Plantation. “It looks like it’s a good race coming up. Nice horses here, without a doubt.”

The five-time graded stakes winner carries a two-race winning streak into Saturday’s race, having won the Grade 1 Cigar Mile Handicap by 1 ¾ lengths in November. The homebred has won four of his last five starts, including a Saratoga optional claimer and the Grade 2 Pennsylvania Derby prior to his seventh in the Grade 1 Breeders’ Cup Classic in November. 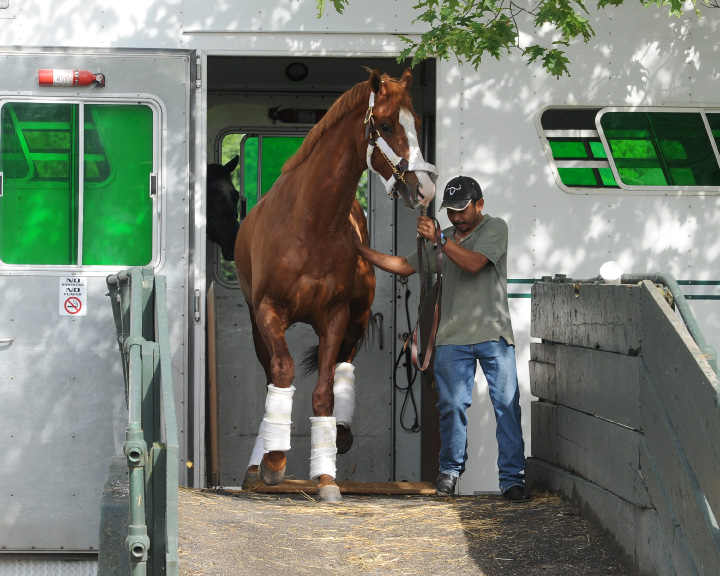 To Honor and Serve, made the 3-1 co-second choice on the morning line and assigned 120 pounds, will leave from the rail with Jose Lezcano aboard.

Lining up to face To Honor and Serve are the top three finishers from the Grade 1, seven-furlong Carter Handicap on April 7 at Aqueduct Racetrack: Jackson Bend, Caleb’s Posse, and Shackleford.

In the Carter, Jackson Bend split horses nearing the three-eighths to challenge pacesetter Shackleford, took over in upper stretch, and held off Caleb’s Posse’s furious stretch run to prevail by a nose. Shackleford finished 1 ½ lengths behind in third.

Jackson Bend is the 121-pound co-highweight for the Met Mile, which his Hall of Fame trainer, Nick Zito, sees as both a badge of honor and a challenge to overcome.

“We’re proud of him, and everyone knows what he has done,” said Zito. “The weight is a pretty big assignment. He’s a small horse; it’s not like he’s the Incredible Hulk. He’s the smallest horse in the field, but you can’t measure the size of his heart, and that’s what matters. Giving weight to To Honor and Serve shows you the deal. Jackson Bend has a great reputation, and hopefully he runs his usual race.”

Corey Nakatani will ride Jackson Bend, 3-1 on the morning line, from the outside in the field of six.

The 8-5 morning-line favorite for the Met Mile is McNeill Stables and Cheyenne Stables’ Caleb’s Posse, who is looking to go one better after finishing a close second in both the Grade 3 Tom Fool Handicap at six furlongs and the Carter at Aqueduct. In 2011, the well-traveled son of Posse won five of 10 starts, including the Grade 1 Foxwoods King’s Bishop at Saratoga over Uncle Mo and the Grade 1 Breeders’ Cup Dirt Mile over Shackleford.

‘There’s nothing you can do about it,” said Von Hemel. “He has a good rider [Rajiv Maragh], who hopefully can take advantage of whatever happens during the race.”

“You can make a case for everybody in the race,” added Von Hemel. “It’s very competitive. It’s a heck of a race.”

Caleb’s Posse will depart from post 3 under 121 pounds, including Maragh.

Unlike Jackson Bend and Caleb’s Posse, Shackleford has competed since the Carter, edging reigning Champion Sprinter Amazombie in a stretch battle to take the Grade 2 Churchill Downs on May 5 by one length, his first victory since his score in the 2011 Preakness. Prior to the Carter, he was seventh in the Grade 1 Donn Handicap in February at Gulfstream Park .

“He ran huge to defeat the champion, and that was a big deal,” said trainer Dale Romans. “It took him a couple of races, but he seems to be returning to his old self. He’s getting better every time.”

Romans has no qualms about having run Shackleford, who carries the colors of breeders Michael Lauffer and W.D. Cubbedge, between the Carter and the Met Mile.

“Shackleford likes to do a lot of work, and having a race under his belt will only help,” said Romans. “He thrives on the activity. It keeps him happy.”

Tabbed at 4-1 and assigned 119 pounds, Shackleford will leave from post 2. John Velazquez will be aboard Shackleford for the first time in the Met Mile.

Mike Repole’s Caixa Eletronica achieved a career high in his most recent start, posting a three-length success in the Grade 2 Charles Town Classic on April 14. Claimed by his current connections for $62,500 in the winter of 2011, Caixa Eletronica joined To Honor and Serve, Jackson Bend, Caleb’s Posse, and Shackleford in the millionaire ranks with his Charles Town Classic victory.

The Charles Town Classic was the second victory of 2012 for Caixa Eletronica, who took the Rise Jim overnight stakes in January at Aqueduct, then was third in that venue’s Grade 3 Toboggan on February 4. He was a well-beaten sixth in the Grade 2 General George Handicap on February 20.

“He ran in the General George off a quick rest, 16 days off the Toboggan,” said Michael McCarthy, assistant to trainer Todd Pletcher. “Things just never worked for him that day. He got bumped around and wasn’t in a great position down the backside. He came out of the race sick. With a horse like him, it’s about his attitude more than anything else. You don’t have to do a lot with him. With a horse who has run as many times as he has, different surfaces, different distances, he pretty much takes care of himself. He’s amazing. There’s not much else he can’t do. You saw that in the Charles Town race, and you’ve seen that in the sprint races here. Nothing would surprise me. Even if he doesn’t win, I don’t think he’ll disgrace himself. I think he’s good enough to win.”

Caixa Eletronica, who at the age of 7 is the oldest Met Mile entrant, was installed at 15-1 on the morning line and assigned 117 pounds. Javier Castellano will ride the son of Arromanches.

Saginaw will attempt to emulate Caixa Eletronica and become a graded stakes winner after having been acquired by his present connections via the claim box.

Trainer David Jacobson, who owns the 6-year-old in partnership with Drawing Away Stable, claimed Saginaw for $30,000 in January at Aqueduct. The purchase has proven to be a good one as Saginaw has won four straight, including the Carr Heaven overnight stakes on April 29 and the Affirmed Success last Saturday at Belmont Park , since the claim.

David Cohen will ride Saginaw , 10-1 on the morning line and weighted at 115 pounds. The duo will leave from post 4.