“I believe our success directly correlates to our dedication to safety,” said Nicholson. “Providing the safest environment possible for our equine and human athletes is something we strive to do each and every day. Safety is a significant part of everything we do and I think it is resonating with our fans.” 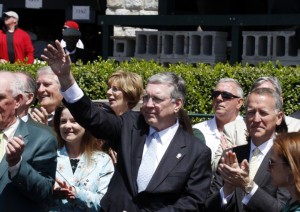 Earlier this month, Nicholson announced plans to retire on September 1. Nicholson has been the President and CEO of Keeneland since 2000 and is widely credited for guiding Keeneland through some difficult times—including multiple industry downturns caused by two global recessions and the outbreak of Mare Reproductive Loss Syndrome. Despite those setbacks, Nicholson ushered in a number of innovations, including a major track renovation and the installation of an all-weather surface on its main track in 2006—a move that made Keeneland one of the safest, most modern racetracks in the world.

“It has been a wonderful tenure for me here at Keeneland and I am grateful for the opportunity to be part of an organization that is so well respected in the community and in the industry,” Nicholson said. “And because we have a such strong, cohesive team in place, I leave knowing Keeneland is in great hands.”

“Just to win a race here is unbelievable,” Ward said. “I come from humble beginnings, and eventually made it to win some races at some of the major meets. Words can’t describe it.”

“This has been a strong meet with great racing,” said Vice President of Racing Rogers Beasley. “We are proud that the top two Kentucky Derby horses raced here and another Derby contender worked here before heading to Churchill Downs for the remainder of his training. We also wish to thank the owners, trainers, jockeys and fans who are such an important part of our meets. We appreciate their loyalty and look forward to seeing them in the fall.”