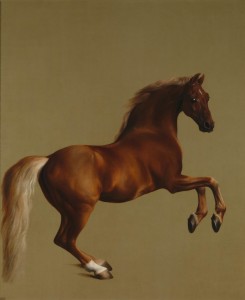 In the different world of the eighteenth, nineteenth and early twentieth centuries the wealthy had far more time to follow their pleasurable pursuits, not the least of which was hunting. Hunting men have always been, by the very nature of their sport, men of courage and character. The pleasures of hunting are well summed up by R.S. Surtees, 1803-65, in Handley Cross when Jorrocks says “’Unting is the sport of kings, the image of war without its guilt, and only five and twenty per cent of its danger”. The thrill of ‘crossing a country’ boldly, on a horse which really gallops and jumps, is hard for a non-hunting person to understand, as is the fascination of watching hounds work.

In the early days, when there was no mechanical transport, horses had to hack many miles to the ‘meet’ and at the end of the day they would probably have been further still from home. So, perhaps in pouring rain or bitter cold, they might well have a thirty mile ride home. It took a certain type of person to do this three or four times a week, as many did. They were consequently very hard men, often hard living, hard drinking and hard gambling as well. Many fortunes were lost and men ruined in those days, which probably accounts for the old adage ‘Fast women and slow horses…the ruination of Man’.

John Mytton, 1796-1834, was one of the extreme characters of the nineteenth century, an incredible sportsman, who went through a fortune and died penniless in the King’s Bench Prison. He is featured in a number of prints by Henry Alken senior. Many other characters of the age are remembered in sporting prints. Lord Orford, who is particularly intriguing, drove a coach pulled by a team of stags. On occasion when he passed some distance from the hunt, the hounds immediately scented the stags and gave chase. 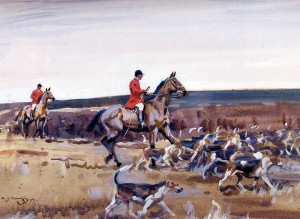 England was the home of hunting and from here packs were established in many different parts of the world, including Italy, India and America. One of particular interest was the British Hunt at St. Petersburg in Russia. It was established in about 1770, with the kennels at Garella. Hounds were frequently ‘drafted’ from the Holderness, though the pack was a mixed breed of foxhounds and harriers. The huntsman was a Yorkshireman. They hunted wolves and foxes but primarily hares. They even occasionally hunted ‘bagged wolves’. The following quote from The Sporting Magazine of 1831 sums up the position: “the wolf affords splendid sport running even straighter than the fox but there are very few instances of a wolf being fairly run down by hounds”. The Sporting Magazine was really the forerunner of today’s Horse and Hound. It published all sorts of hunting and racing news and views, and gives us a marvelous insight into the sporting life of England in the late eighteenth and the nineteenth century.

It is because of tremendously strong sporting traditions that our sporting artists developed and flourished, and still flourish today.