ELMONT , N.Y. – All trainer Michael Matz wanted was a chance for Union Rags to show what kind of horse he is. Saturday afternoon at Belmont Park , the hard-luck colt got that chance and the result was a thrilling victory over Paynter in the 144thrunning of the Grade 1, $1 million Belmont Stakes.

Coming off a troubled-trip seventh in the Kentucky Derby, Union Rags was brilliantly ridden by new jockey John Velazquez in the 1 ½-mile Belmont , which lost its marquee horse on Friday when Triple Crown hopeful I’ll Have Another was retired with an injured tendon. In the Derby and Preakness winner’s absence, the crowd of 85,811 – the largest for a non-Triple Crown Belmont and the sixth-largest in Belmont Park history – made Derby third-place finisher Dullahan the slight favorite in the “Test of the Champion,” with Union Rags a close second choice, also at 5-2.

With Paynter unchallenged around the turn and into the stretch, it appeared that Smith and Hall of Fame trainer Bob Baffert were about to gain retribution for their narrow losses with favored Bodemeister in the first two legs of the Triple Crown. 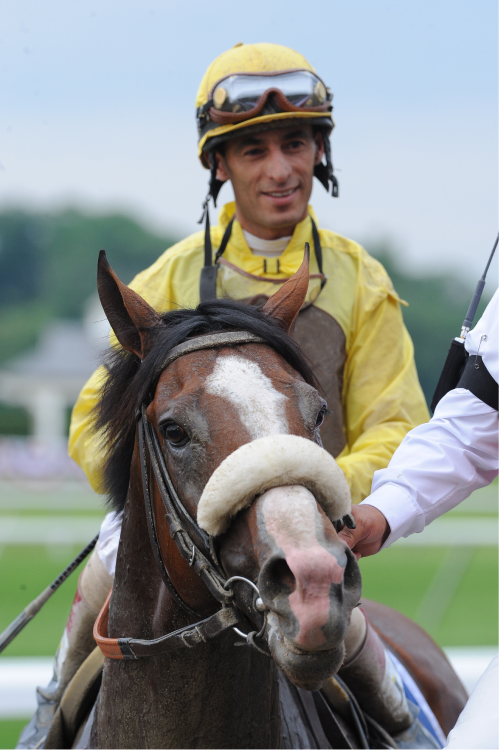 But with Smith going to a left-handed whip as Union Rags steadily closed in, Velazquez boldly sent the long-striding colt up to the resulting hole on the rail, and he charged through with 110 yards to go and won by a neck. His time for the 1 ½ miles was 2:30.42.

“I waited for a hole to open up and I got lucky,” said Velazquez, who won the 2007 Belmont with the filly Rags to Riches. “The horse did it all.”

“It looked like we had it,”said Baffert. “It looked like it was ours. I really felt like I was going to win the Belmont . It was snatched away again.”

Atigun closed for third, with Dullahan finishing a non-threatening seventh.

“Paynter ran a big race, they all ran big. Union Rags ran big; we just didn’t have a finishing kick,” said Dale Romans, trainer of the beaten favorite. “I think it puts Union Rags in the picture for an Eclipse Award. There’s a lot of year left, and with I’ll Have Another out, it’s definitely in his own hands.”

Union Rags, who was both sold as a yearling and later bought back by owner Phyllis Wyeth, won the first three races of his career, including the Grade 2 Three Chimneys Saratoga Special and Belmont ’s Grade 1 Champagne. After a wide-trip second in the Breeders’ Cup Juvenile to Hansen, the eventual champion 2-Year-Old Male, Union Rags began his 3-year-old campaign as one of the favorites for the Derby . Winner of the Grade 2 Fountain of Youth, and third in the Grade 1 Florida Derby, he was sent off as the 5-1 second choice in the Kentucky Derby but was beaten 7 ½ lengths after a nightmare trip.

“We always thought this horse had Triple Crown potential,” said Matz, who trained 2006 Kentucky Derby winner Barbaro. “When we trained him, we gave him four races as a 2-year-old and gave him a rest and had a good plan. He never missed a beat. His first race [this year] couldn’t have been any easier. He had trouble in his second race and his third race. I do really think that this horse, when he has a clean trip and can show himself, is one of the best 3-year-olds in this crop. Whether he could have done something against I’ll Have Another, I don’t know, but it sure would have been fun to see.”

“It was my dream and he made it come true,” said Wyeth, who has been confined to a wheelchair as the result of a 1962 car accident. “Nobody would have gotten through on the rail other than Johnny. That was unbelievable. He just said, ‘Move over, I’m coming.’ He believed in the horse, and Michael got him there.” 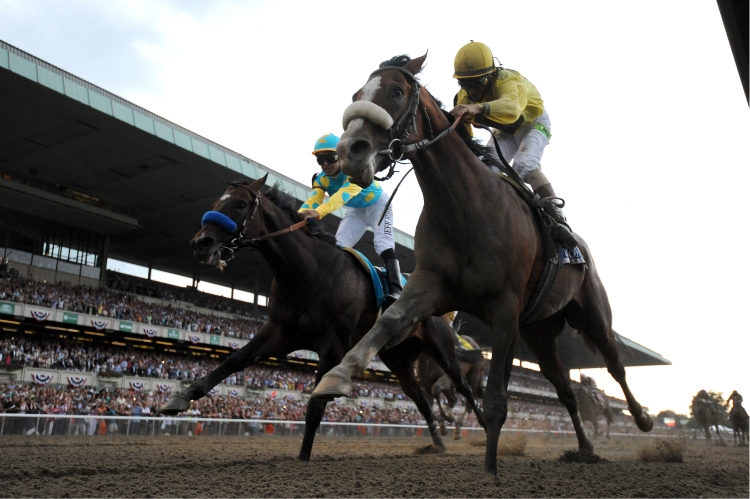